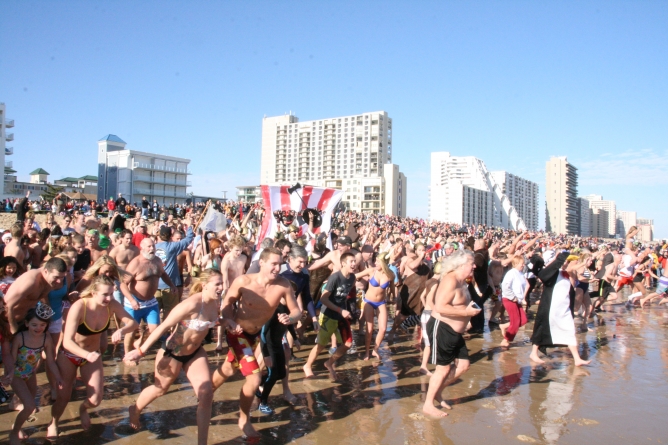 (Jan. 3, 2014) An estimated 750-plus people sprinted into the cold ocean on New Year’s Day during the 20th annual Penguin Swim, a fundraiser for Atlantic General Hospital.

Participants were led to the beach just before the 1 p.m. swim. Once everyone was ready, a signal was given by Colby Phillips of the Ocean City Beach Patrol for the penguins to enter the ocean. Children had their own area and went in first, followed by the adults. “Penguins” donned everything from bathing suits to superhero attire and character costumes as they plunged into the 44-degree ocean at 91st Street. Some people got a little wet, while others dove into the water for a swim. The air temperature was about 46 degrees.

After the swim, penguins gathered at the Princess Royale’s atrium to warm up in the pool and hot tubs. Awards were presented to the youngest and oldest swimmers, as well as to the top team and individual money-raisers.

“Thank you for coming out and sharing your New Year’s Day with us,” AGH CEO Michael Franklin said to the crown gathered in the atrium. “For a Wednesday, it’s a great crowd. We hope you enjoyed the water and the beach out there. It was a beautiful day to have the event.”

The youngest penguin was 10-month-old Macklin Bitler of Frankford, Del. Eighty-year-old Joe Gaffney of Selbyville was the oldest participant.

Craig Kettler of Leesburg, Va., brought in $4,509 and was named the No. 1 adult individual donor again this year. Kettler has participated in the swim for six years. Woody “Butch” German of Baltimore, a 10-year swim participant, collected $1,480 in donations, good for second place. Ivan Zorn of Berlin raised $280 and earned third-place honors as the largest individual donor.

The Bull on the Beach team, which included more than 100 swimmers, was the top team/business fund raiser again this year, donating $30,000.

During the 20-year history of the event, the Bull on the Beach team has generated more than $350,000 for AGH. Bull on the Beach owner, Phil Houck, again led his team from the 94th Street restaurant to the swim starting line.

The AGH Flapping Flamingos collected $2,254 and Fisher’s Popcorn garnered $1,200 to round out the top three businesses.

Awards were also presented to teams and individuals 18 and younger who collected the most donations.

In 19 years, the Penguin Swim has raised more than $900,000 for AGH. The goal for the 20th annual swim was $80,000. Sal Fasano, co-organizer of the event with Madalaine How, said donations are still coming in so the final total was not available immediately after the swim. He was confident the $80,000 goal would be met.

“I think we did very well. We think we’re going to be on mark with that, but we’re still tallying everything up,” Fasano said. “We had the virtual swim this year (those unable to attend could register and raise money and submit a photo of themselves jumping into water where ever they are) and we still have money coming in from that, and we still have to go around to all the bars and restaurants that were raising money up until the last minute…Everything went really well. We had a great turnout and a lot of [businesses] stepped up as sponsored.”

If the $1 million mark wasn’t achieved this year, organizers hope to reach that number next year.

“Hopefully, we’re going to make it bigger and better next year,” Fasano.

Atlantic General Hospital has been providing health care to residents of Worcester, Wicomico and Somerset counties in Maryland and Sussex County, Del., since May 1993.