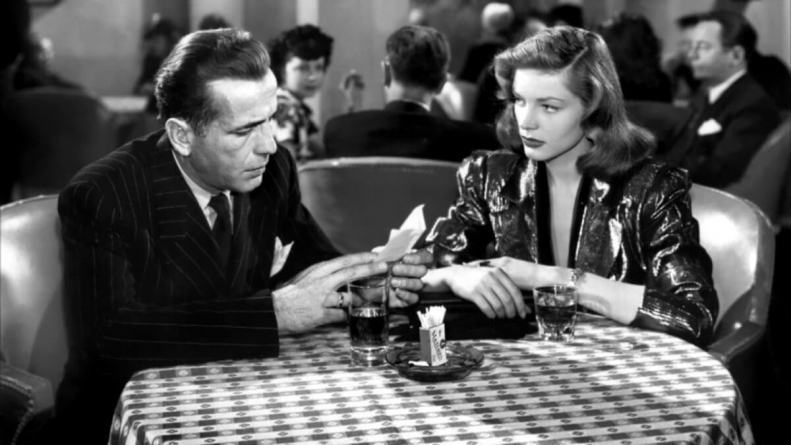 “This is a very complicated case, Maude. You know, a lotta ins, a lotta outs, a lotta what-have-yous. And, uh, a lotta strands to keep in my head, man. Lotta strands in old Duder’s head.”

-The Dude
The Big Lebowski

Before we get started, I’ll be clear. You should watch the Big Sleep. It’s seminal work of Old Hollywood, film noir and ubiquitous in popular culture. It’s also a remarkably well made film, especially thanks to Hawks’ utilitarian direction It’s part of the National Film Registry and features Bogart and Bacall at their Bogartiest and Bacalliest, respectively. If somehow you’ve avoided this extremely popular classic, avoid it no more. It’s a significant work.
But it’s not my favorite.
I struggle to admit this, since it outs me as the unsophisticated shmuck I am, but I get very easily lost in its winding, complex plot. I am overwhelmed by the constantly shifting set of names, dates, relationships, events and revelations that Bogart’s hard-boiled Phillip Marlowe finds himself wrapped up in. Of course, this is one of The Big Sleep’s trademarks and lends a palpable sense of tension and imbalance as the audience, along with Marlowe, struggles to keep up and put the pieces together. But when a simpleton like me fails to keep up, the significance behind many plot points and encounters can be lost on them. The often parodied, dry, quick, monotone style of delivering dialogue popular in its era does not help in this regard either. While some viewers might share these criticisms, I ‘m sure that much of it is due to my own youth and inexperience with older films like this. If you like a complex and twisting mystery, then please ignore my complaints.
Now let’s talk about why I love this film.
Look, I really like noir, and this film is a rich truffle made from the darkest, moodiest chocolate. The convolution that is its plot is a staple of the genre, dating back to its pulp-novel roots, and its present in two of my favorite films; The Coen Brother’s The Big Lebowski and Ryan Johnson’s Brick, both of which owe much to The Big Sleep. But where I really think the film delivers is in its look. Syd Hixox’s cinematography bathes the world in shadow, hiding secrets from the viewer and its characters, and complimenting that good-ole post-war nihilism which gives the genre and the film its mood.
I have not read the Raymond Chandler novel on which the film is based, but with a screenplay by Leigh Brackett, Jules Furthman and William “friggin’” Faulkner, the dialogue and characters are really something impressive. And of course, Bogart is an exemplum of the hard-boiled detective whose performance commands nearly every scene he’s in, which is pretty much all of them. Bacall’s Vivian Rutledge cuts the figure of both the femme fetale and the Hawksian Woman (Hawks had a habit of casting strong, assertive female roles, who only after putting up a good fight would fall into the damsel-in-distress role)
What I’m getting at is…
If you have any interest in the history of American film, the career of Bogart, Bacall or Hawks, the film noir genre, beautiful black and white cinematography, or cultural literacy and touchstones, watch The Big Sleep. If you’re like me and come away from it scared, overwhelmed and deeply confused, IMBD has a handy FAQ for the film you can find here.
You can see The Big Sleep at Clayton Theatre in Dagsboro on Monday, 2/22

Steven grew up in north Ocean City but now lives in Nanticoke Maryland, 20 minutes outside of Salisbury. He currently attends Salisbury University and is finishing up his bachelor's in film. Fascinated by motion-picture as a form, he's especially interested in the evolving relationship between television and film. Steven is a cool dude, and like most cool dudes, Steven spends his time juggling, playing D&D, scrutinizing sketch comedy, and jamming on the spoons and rhythm bones to Earl Scruggs. Steven loves grapefruit.