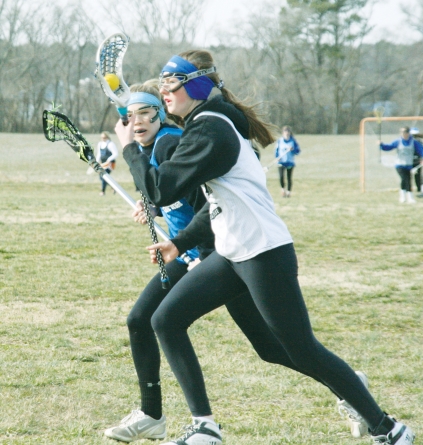 (March 22, 2013) Stephen Decatur girls’ lacrosse Coach Bob Musitano said the 20 players on his roster are focused and committed. The girls came to tryouts fit and they work hard during practices.

Fourteen Lady Seahawks are veterans and have experience playing at the varsity level.

“We have a really talented squad. We lost some players [to graduation], but the juniors from last year who are now seniors fill in nicely,” said Musitano, who has coached the Seahawks for 10 seasons. Half of the returning athletes are seniors. Decatur went 9-5 in 2012, falling in the 3A-2A South Regional semifinals to Queen Anne’s, 14-9. “They’re used to playing together as a class, now all the girls need to get used to playing with each other. We’re looking for them to mesh.”

Seniors Ashley Trice (attack wing), who has signed to play for Div. I Furman University in Greenville, S.C., and Annie Brown (defense wing) have been named captains. Both are four-year varsity players.

“I was voted team captain by the girls and that’s a big honor because it shows that they trust me and they think of me as a leader,” Trice said. “I’m just ready to have fun with all of them. It’s my last year and I just want to make it memorable.”

Added Brown, “We’ll have good leadership this year. All our seniors work together really well and it’s just a good atmosphere. We all get along really well, which makes things run smoothly.”

“We have pretty high expectations and we’re trying to meet them,” she said.

Senior Skylar Sieg-fried, who has committed to play lacrosse for Jacksonville University in Florida, returns for her second season in the goal.

“As a goalie, I lead the defense, but as a senior, I also have to lead the team, as well, and motivate the girls,” she said. “Even though we lost a lot of players [to graduation], we replaced them with players who have equivalent or better lacrosse skills … So far, we look pretty good and everyone’s doing the best they can.”

“I feel the season is a success if the girls reach their full potential,” Musitano said. “I’m happy right now. The girls are responding, they’re working hard and it’s fun.”