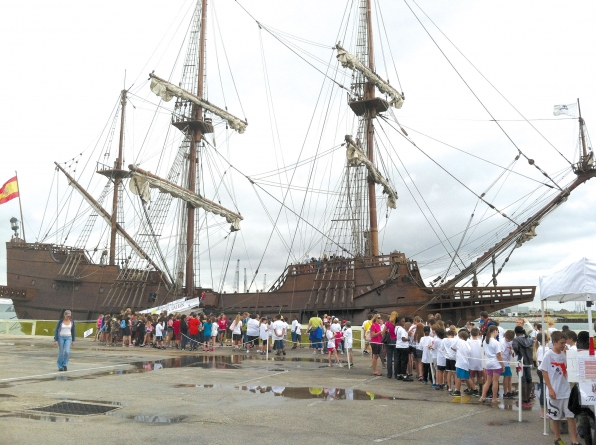 (July 26, 2013) With event coordinators planning an on-site visit for next week, plans to bring a 17th century high-seas vessel to berth in the resort in less than a month are being finalized.

“Their logistics officer is coming Monday, and after that it’ll be a go,” said Steve Webster of the National Air, Sea, and Space Foundation. “All they’ve seen right now is from Google Maps and the Coast Guard, so they just want to see the site itself and make sure it’ll work.”

The 170-foot-long vessel will be moored on along the bayside boardwalk on Chicago Avenue from Third to Fourth Streets. City Engineer Terry McGean said last week that it will cost the town roughly $3,000 to install concrete anchors beneath the boards for the ship to be tied down.

“They’re asking for four footers now, with larger cleats,” city Special Events Director Frank Miller said. “Basically, we’ve got a week to figure it out and get the parts ordered.”

The ship will be arriving in the resort on Aug. 20 or 21, after leaving New York on Aug. 18. It will stay through Sept. 2. The northern, one-way portion of Chicago Avenue and the attached parking spaces will be used for vendors, exhibits and staging tours of the ship itself.

The potential event was brought to the city by promoter Bryan Lilley, whose company B. Lilley Productions puts on the annual OC Air Show. Lilley is also active with the non-profit NASSF, which funds educational and historical events, including the tall ship event at the “Viva Florida 500” celebration this year commemorating the 500th anniversary of the discovery of Florida by Spanish explorer Ponce de Leon.

The featured ship at the Florida event in May was from the Nao Victoria Foundation, a non-profit group based in Spain that primarily deals with historical events relating to the 16th century age of Spanish exploration. Known simply as “El Galeon,” the six-deck vessel replicates those that were sailed at the time and is essentially a floating museum.

However, the major question for the city is where to put a ship of that size. The city owns a pier at Sunset Park downtown, but it is not long enough, and part of the adjacent Coast Guard pier would have to be utilized. Due to federal red tape, the location was moved to Chicago Avenue.

Officials are also confident that the ship will physically fit the resort, given that it will have to pass through the drawbridge on Route 50 and navigate the bay channel, were there are several sandbars.

These appear to be at a 20-foot or greater depth, according to McGean, while the ship has a draft of 10 or 11 feet.