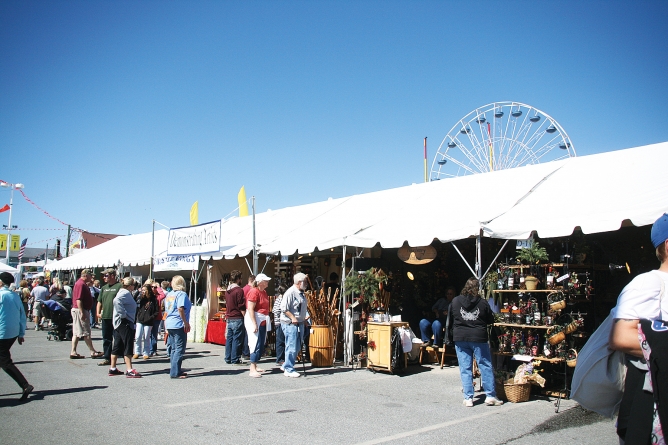 (Sept. 13, 2013) Sunfest, Ocean City’s annual fall festival, kicks off Thursday, marking the end of a busy summer and the start of the long-awaited “second season.”

Scheduled for Sept. 19-22, the four-day festival offers food, arts and crafts, live entertainment and an assortment of family activities.

In 2010 and 2011, Sunfest was rated the best Classic and Contemporary Arts and Crafts Show in the country by Sunshine Artist, “America’s Premiere Show and Festival Magazine.” The rankings are based on audit reports, reader surveys and anecdotal reports from participating exhibitors. Last year, Sunfest was rated No. 2. The drop could have be the result of rain that fell on the 37th annual celebration in 2011. Overall attendance for the four-day 2011 festival was 154,507, a 7-percent decrease from the 2010 event.

“No. 2 is great and we can always get No. 1 back if the vendors have a good year,” Shuster said before the 2012 festival. “Rain does affect sales.”

A few weeks ago it was announced that Sunfest was back on top in the No. 1 spot of the 100 Best Classic and Contemporary Craft Shows. Springfest, Ocean City’s spring festival in May, earned the fifth-place spot.

“It’s nice to climb back to the top of the mountain. We take pride in the recognition we get from (being ranked),” said Tom Shuster, director of the Ocean City Recreation and Parks Department. “Vendors and [attendees] see a value in what we provide.…We try to make all groups feel welcome and part of the fun of Sunfest, and, good weather always helps.”

Four days of ideal weather was a major factor in bringing large crowds to the inlet parking lot for the 38th annual Sunfest celebration last year. Sunfest experienced its biggest attendance since 2008, when it drew an estimated 194,385 visitors. Last year’s attendance was 185,016, an increase of more than 30,000 guests from 2011, when rain dampened part of the festival.

Valerie Lynch-Beaudin and her Onóra Island Treasure Boxes company, based in Panama City, Fla., made their Sunfest debut last year. She and her husband handcraft Celtic Treasure Boxes.

“Sunfest is now our No. 1 show in regards to total sales,” she said after the 2012 event. “Weather was great, we had a good time, met some wonderful folks and made some money. It doesn’t get much better than that…”

Lucy Wirsching of Pasadena, Md. was also a first-time Sunfest vendor last year. She thought the venue was a perfect match for her one-of-a-kind driftwood sailboats.

“I can’t believe that I have been missing out on a great festival. The music was fantastic, the food was great and the crowd was outstanding,” she said after the 2012 festival. “Not only did I have immediate sales, I left the show with custom orders for 23 new boats. The show was a huge success … I must say that it was the most organized show I have participated in.”

The 39th annual Sunfest celebration will kick off at 9:30 a.m. on Thursday, Sept. 19, with a Boardwalk parade that will conclude at the festival grounds in the inlet parking lot. The opening ceremony will feature the Ocean City Police Color Guard, Stephen Decatur High School’s cheerleaders and Beyond the Blue concert choir; Mayor Rick Meehan, City Council members and other town officials. At 10 a.m., a ribbon-cutting ceremony will open the festival.

More than 180 arts and crafts vendors will fill two tents with items such as pottery, ceramics, carvings, jewelry, fine art, photography, paintings, candles and scents, soaps, dolls, pet products, clothing and apparel, home and garden items, woodwork and metal ware. About a dozen artists will again demonstrate their skills in the midway section of the festival grounds.

“Our food tent is always eclectic in its tastes and offerings,” Shuster said.

This year’s musical entertainment will range from country to rock ‘n’ roll and jazz. Admission is free, although tickets are required for the main stage headlining acts.

Jesse Garron will perform his Tribute to Elvis show on Thursday, Sept. 19. Tickets cost $5-$10. On Friday, Sept. 20, country musicians Kip Moore and Kacey Musgraves will take the stage. Tickets range from $20 to $55. The Beach Boys will entertain a sold-out crowd on Saturday, Sept. 21. Tickets for the concert were gone by the end of May, the earliest Shuster said he can remember tickets selling out for a Sunfest show. All shows will begin at 8 p.m.

Tickets for headline acts are on sale at the Roland E. Powell Convention Center box office on 40th Street. Box office hours are 8 a.m. to 4:30 p.m. Monday through Friday. They may also be purchased by calling TicketMaster at 800-551-7328 or by visiting www.ticketmaster.com.

Tickets will be sold on site at the festival grounds during the event.

Sunfest is for all ages. Children may take part in an assortment of activities, including Xtreme Events’ interactive inflatables on the beach, a rock-climbing wall, sand art, temporary henna tattoos and face painting.

“September is always a special time in Ocean City. We think Sunfest is one of the best reasons to visit Ocean City in September,” Shuster said. “We’re hoping for another great turnout.”

Parking is restricted at Sunfest. Visitors are urged to take the bus to the festival grounds. The Boardwalk tram will also offer service daily.