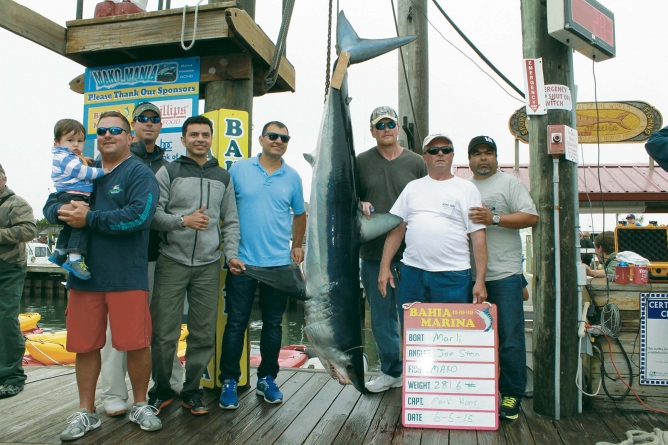 “It went fantastic. Without them it wouldn’t be a success,” event co-director Earl Conley said.

Many of the participants have competed in the tournament before.

“They love the tournament and we love having them as participants,” he said. “We want to thank all of the diehard fishermen and strong supporting cast of anglers and captains.”

The extended forecast prior to the tournament was unfavorable, which deterred some captains with smaller boats from participating in the tournament, Conley said.

Conditions were a little rough offshore last Friday, the first day of Mako Mania, but Saturday and Sunday the ocean was calmer, much better for fishing than expected.

Joe Stein caught a 281.6-pound mako last Friday aboard Marli, which earned him and his teammates first place in the division. The crew won $27,590.

Adam Sutton reeled in a 183.5-pound mako last Friday while fishing on Talkin’ Trash. The group was awarded $9,534.

This was the first year first-, second- and third-place prizes were awarded in the thresher division. In past years it was heaviest thresher winner takes all.

Brice Bogar battled a 465.7-pound thresher for two hours last Saturday while fishing on Reel Vibrations. Because of participation in added-entry level calcuttas, Bogar and his teammates were awarded $10,899.

Mike Cromwell took first place in the bluefish division with a 10 pounder brought to the Bahia Marina scale, between 21st and 22nd streets, bayside, last Saturday. Cromwell and his Lisa teammates won $4,776.

Proceeds from the ladies-only fishing tournament will go to the American Cancer Society. While some of the money will be used for research on a national level, the remainder stays in the area to assist in local breast cancer awareness and patient programs and services. For more information, call Bahia Marina at 410-289-7438.