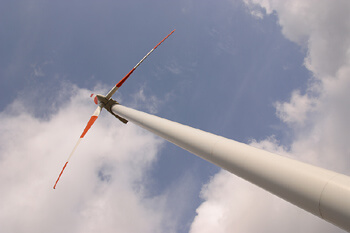 (Dec. 20, 2013) State and national officials announced on Tuesday a proposed notice of sale for nearly 80,000 acres off Ocean City’s shoreline to be used for commercial wind farm development.

“Today’s announcement brings our state one step closer to harnessing the tremendous potential of offshore wind energy,” said Gov. Martin O’Malley, who made the announcement alongside Secretary of the Interior Sally Jewell and Bureau of Ocean Energy Management Director Tommy Beaudreau in Baltimore.

“The development of offshore wind will drive economic development in Maryland, create high-quality, family-supporting jobs for Maryland residents and play a major role in reducing emissions and protecting the environment,” said O’Malley, a longtime champion of the project.

The online auction for the wind farm area, like to be leased as a north zone of 32,737 acres and south zone of 47,970 acres, should take place next year, Moriarty said.

The winner will issue a site assessment plan within six months to BOEM for its approval, and then have four and a half years to submit a detailed construction and operations plan for the site before any turbines go up, Moriarty said.

Lessees will hold the offshore area for a 25-year term, she said.

The site off Ocean City is the third of its kind in the country, with 112,799 offshore acres auctioned in Virginia and 164,750 in Rhode Island and Massachusetts earlier this year.

“Maryland is a leader when it comes to building a sustainable energy future, including the vast wind energy potential along the Atlantic,” Jewell said.

There is a 60-day comment period following the announcement, ongoing through Feb. 18. Visit www.regulations.gov to submit comments regarding the Maryland Proposed Sale Notice under Docket No. BOEM-2013-0002.

To learn more about the proposed sale notice in Maryland, visit www.boem.gov/Maryland.