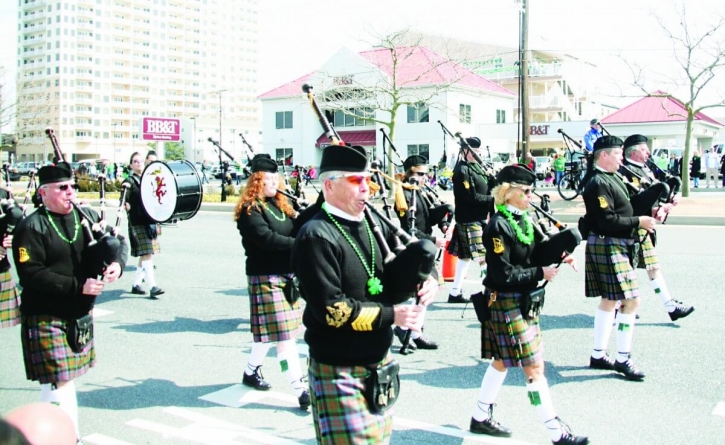 Sponsored by the Delmarva Irish-American Club, the annual and anticipated event starts at noon on 60th Street and travels south along Coastal Highway to 45th Street, where the judges stand and an Irish festival complete with green beer, corned beef and bagpipes will be under way.

The 2014 event tops last year’s 120 entries, with 132 groups on foot and floats from across Maryland, Delaware, Pennsylvania, Virginia, New Jersey and Washington, D.C.

Some favorite floats, like Seacrets’ 98.1 FM, complete with a live band, and BJ’s on the Water will be back while new bars, businesses and brew pubs from across town will make their début in Saturday’s parade. There will be three sets of pipes and drums groups and marching bands from Stephen Decatur and Sussex Central high schools, Mann said.

“They go all out,” he said of the entrants, who vie for judges’ attention at the 45th Street bandstand.

Viewers can watch the parade from bleachers at the 45th Street center or from anywhere along Coastal Highway between 60th and 45th streets. The top marching band, commercial float, non-commercial float, motorized unit, best adult and youth marching unit, special committee award and best overall entry in the parade will take home trophies.

The Irish-American festival at 45th Street will be in full swing by the time the parade makes its way down Coastal Highway. The celebration kicks off at 11 a.m. and lasts until around 3 p.m. with Irish music, folk dancing, corned beef sandwiches, beer, coffee and desserts. After that, the party continues in restaurants and bars throughout Ocean City.

This year, Cathy Donovan with daughter Colleen Brown and step-daughter Kyla Donovan-Porter will serve as the parade’s grand marshals. Donovan has been an active member of the Irish-American Club for 35 years and her West Ocean City business New Wave has been giving back to the community for just as long.

The printing company produces the T-shirts on sale at the 45th Street party, Donovan said, and donates the proceeds to the Delmarva Irish-American Club to be used for local scholarships.

It will continue the tradition this year, with Donovan’s son-in-law Matt Brown manning the booth.

The holiday in the resort was not always the extravaganza it is today, though. The inaugural parade featured just five or six walkers and the following year, it grew to include a Pontiac convertible and four waitresses from McGee’s, the local Irish bar now known as Shenanigan’s Irish Pub.

All of the proceeds from the parade and festival go to local high school scholarships and charities, such as Diakonia and Hospice, Mann said. Last year, the event raised more than $35,000 — almost $20,000 for scholarships, $5,000 for area recreation departments and $10,000 for a new Hospice building, Mann said.

The Delmarva Irish-American Club, founded in 1980, has awarded more than $250,000 in scholarships to local students from the proceeds of past parades. The club now boasts more than 300 members and is open to anyone who is Irish, Irish at heart or who just appreciates all things Irish.