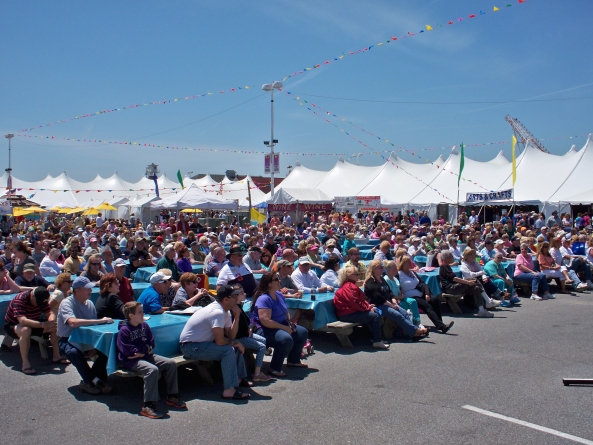 (May 9, 2014) After two years of dreary weather, Springfest lived up to its name last week, bringing a weekend of warm, sunny weather to more than 100,000 attendees during the four-day festival.

Attendance was up slightly from the five-year average and trumped last year’s turnout of 97,021, said Frank Miller, Special Events Superintendent for the Town of Ocean City.

In all, 102,221 visitors made their way through the four big-top tents at Ocean City’s inlet last Thursday through Sunday, Miller said.

“After a very cold winter, everybody was happy to get out and enjoy Springfest,” he said. “We’re right where we should be for such a mature event.”

Celebrating its 24th year last weekend, Springfest brought more than 250 arts and crafts vendors from across the country, as well as festival fare and a packed lineup of live entertainment.

“It’s superior to other festivals and other locations,” said vendor Judy Black.

She’s been traveling to festivals for four years alongside husband Ed Black with Created to Enjoy games, selling amusements such as tabletop shuffleboard and cornhole bags. After success at their first Sunfest last year, the couple decided to try Ocean City’s premier spring event.

What made Springfest a success was a combination of strong advertising, the organization behind the event and the festival coordinators themselves, Black said.

“They’re out, they’re checking, they’re making sure it’s neat and orderly,” she said.

Her games booth did better than expected, selling out of every item except for some cornhole bean bags by Sunday.

“I know that that is very dependent upon the weather, but even Thursday, we had mist, rain, fog and still people came out and supported the festival… Thursday the sales were very good, for a Thursday.”

Springfest veteran Edna Boyce, of Boyce Art Glass, has been attending Springfest for four years with her husband Kevin Boyce and said sales were just above average at her handblown glass table.

“The weather was awesome,” she said. “The last two years have been a lot cooler, so it was a very nice weekend and I think that really helped.”

Boyce said her sales peaked Friday and Saturday — something echoed in Miller’s numbers.

Springfest’s slowest day was opening day last Thursday, when 10,248 braved the foggy weather for the wares, fare and live music.

As the sky cleared throughout the day, sales at Springfest’s ticket booth jumped and The Fabulous Hubcaps played to an audience of about 1,500 that night, Miller said.

Friday’s attendance picked up to 29,936 and country music legend Merle Haggard played a sold-out show to 1,787 on the Entertainment Pavilion stage that night.

But Springfest’s biggest day was Saturday, when 42,617 enjoyed ideal weather for the outdoor event. Miller said around 1,500 guests at the Loverboy concert with opening band The Reagan Years that night “got the show of a lifetime” at the performance lasting more than two hours.

Springfest wrapped Sunday with a showing of 19,420 for closing day.

“I think if we had had the weather on Thursday that we did on Friday, Saturday and Sunday, it would’ve been a phenomenal year,” Miller said. As it stands, though, “it was a very successful event.”

“It was a good show for us,” said Leynel Arias Lozano of Fun and Family Friend Wire Sculpture, who attended Springfest for the first time this year.

“It was the first time we did it and we are going to send the application for Sunfest tomorrow,” he said. “It was a good crowd.”

The family-oriented festival, with its mix of  “everything from gospel Sunday morning to rock at night” provided “a very good mix” at Springfest,” she said.

“It was beautiful there and we would definitely love to come back,” Black said. “It was a very good festival all the way around.”

Though he can’t unveil what the city has in mind for Springfest’s 25th anniversary next year, “there’s going to be a couple of new things to look out for in 2015,” Miller said.

“2014 was a good year to test a couple of small things and look for things that we can do a little bit differently going into our 25th year,” he said. His committee will be taking those ideas to the City Council in the coming weeks, he said.

“Several of the vendors said that they had their best Springfest ever and one even compared it to Sunfest. That was quite a compliment for 2014,” Miller said.