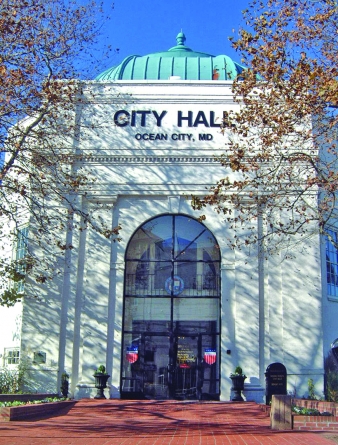 “I don’t look at it as a negative. We have a role, we have a function, which you don’t see as long as is going well,” said the head of the city’s Public Works Department. “If the Town of Ocean City was a restaurant, we’d be the back of the house. We’re the cooks, the dishwashers.”

But on Jan. 1, Adkins and his employees will get the attention they likely deserve, but never ask for. The theme of this year’s 17th annual Mayor’s Open House, held from 1 to 3 p.m. on New Year’s Day at City Hall, is “The Silent Giants: The men and women of the Public Works Department.”

Although no one in particular takes credit for the “silent giant” moniker, Adkins said he’s “said that for years.”

“Giant as in the role we play in making sure the municipality continues to function. But at the same time, we’re pretty silent. You flush the toilet and you don’t think about it as long as the stuff just goes away. You put the trash out and it disappears and you don’t give it a second thought.”

On Tuesday, however, Adkins and his fellow Public Works administrators will provide the public with some of the gritty details about the resort’s largest single department – in terms of both financial outlay and manpower. Public Works has nearly 200 full-time employees and more than doubles in size with seasonal workers every summer.

“There are a number of us that are going to be there for some story-telling,” Adkins said. Many of the department’s division heads and supervisors are employees who rose through the organization over several decades, some with more than 40 years of service to the city. As a 29-year veteran, Adkins said he considers himself somewhat of a junior member, despite holding the highest official position.

Deputy Director for utilities Jim Parsons, as well as Water Superintendant Bud Iman and Wastewater Superintendant Charlie Felin, will speak on the history of the city’s public water and sewer system, which was conceived in the 1940s and originally involved shooting untreated sewage directly into the bay.

Solid Waste Manager Steve Brown will speak on the city’s garbage and public disposal system, along with Deputy Director Dick Malone, who began the town’s recycling program in the early 1990s. Since then, the city has moved onto a system in which all garbage – recyclables and landfill – is trucked to a facility in Pennsylvania where it is incinerated to generate electricity.

Transportation Superintendant George Thornes and Airport Manager Jaime Giandomenico will also be available to speak about their respective divisions. Adkins and Maintenance Manager John VanFossen will also talk about the general construction and maintenance of the city’s infrastructure.

Equipment displays will also be set up outside City Hall for the New Year’s event, with demonstrations of the city’s most specialized equipment that cares for its most lucrative public asset – the beach. The town maintains a fleet of beach sanitizers, which comb debris from the sand, as well as sand-capable garbage rigs that pick up and dump the trash barrels found on the beach.

But despite its decades of success in building up the city, the department now faces the challenge of having its resources cut at the same time that its revenue-generating responsibilities have been increased.

“Looking at where we’re going, there are two key issues that quickly surface,” Adkins said. The first of these is the maintenance of infrastructure that does not generate any income and thus must be funded through the town’s general budget.

Many of Adkins’ divisions, such as water, wastewater, transportation, and aviation, are run as separate “enterprise funds” that largely pay their own way and have the ability to use their income for themselves, as opposed to being part of the general municipal kitty. Service fees make water and wastewater largely self-sufficient, while transportation and aviation have state and federal grants apportioned to them that keep them independently solvent.

“I’ve got it pretty well covered financially, except for our own local infrastructure, namely our roadways and our storm drains,” Adkins said. The constant need to repave streets after summer abuse and storm drains that struggle on a flat, sea level barrier island are two of the city’s most nagging fiscal difficulties.

Furthermore, Adkins’s department has repeatedly voiced its concern about the increasing strain of special events, which the city has relied on more and more heavily since 2008 to bolster tourism in a time of lowered discretionary spending.

“We’ll continue to impress upon the mayor and City Council and the city manager that, although every special event brings something that’s potentially really great for the town, you can’t look at them with blinders on, you have to look at them comprehensively,” he said.

For the massive events that have become a bulwark of the summer season over the past four years, such as the Dew Tour, Adkins said the key is to press the event organizers to provide for their own.

“Those events, to a large degree, have to be self-sufficient going forward,” Adkins said. “We either adversely impact our own service or they need to increase their own manpower.”