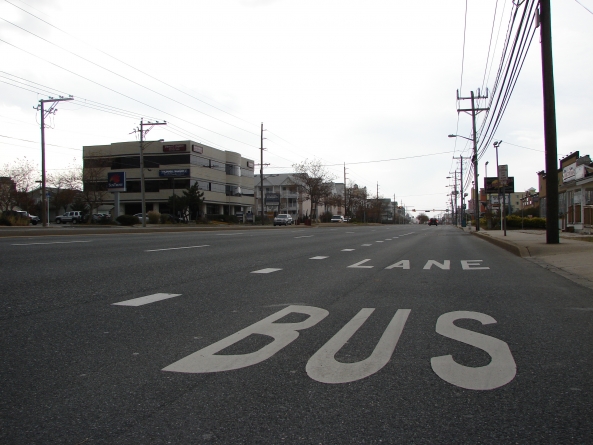 (Dec. 28, 2012) Following the presentation of its latest traffic safety study to the city last month, in which a number of major changes to the layout of Coastal Highway were explored, the State Highway Administration says it is continuing to look at the long-term solutions while also instituting a number of quicker fixes.

In November, Cimino had presented the city with the results of the SHA’s pedestrian safety study, conducted in what had been identified as a “high pedestrian accident location” on Coastal Highway between the Convention Center and the Route 90 bridge, an area which has a number of major nightlife attractions on the west side of the road that draw pedestrians across from the hotels and condos on the ocean side.

The SHA proposed to study a number of long-term solutions that would involve major structural changes, such as the installation of a median barrier that would prevent mid-block crossings, or the removal of one traffic lane to install larger bike lanes and sidewalks.

“The Office of Highway Design is looking at whether those things are even feasible,” Cimino said. “For instance, if we reduce lanes, is it going to create a gridlock and be an impossible situation?”

The City Council also gave the nod, however, for Cimino to proceed with some less-invasive fixes that could be in place for summer 2013.

Most noticeable among these is Cimino’s request, which he expects the SHA and OHD to soon approve, to install at traffic light and pedestrian signal at 54th Street. This would cut in half the highway’s longest stretch of uncontrolled road, between the lights at 52nd and 56th Streets.

Matthew Jude Cheswick, 22, a Towson University student from Cooksville, was killed May 28 while in the bus lane at 54th Street, having almost made it across the highway. He was struck by a drunk driver, Diogo Miller Facchini, who fled the scene but was later apprehended. Facchini was recently sentenced to five years in prison.

On June 15, an eerily similar incident occurred at the same location, in which a crewmember of the U.S. Air Force Thunderbirds – in town for the OC Air Show – was struck. The driver was found to be not at fault.

Additionally, Cimino has already received approval to install new signals at the 94th Street, 130th Street, and 28th Street/Robin Drive intersections. These signals will feature additional arrow markers that will give the side cross streets separate times to turn.

“We’ve split those side road phases, which is what we call them,” Cimino said. “It means that if you’re sitting at 94th and you’re coming from the bayside, you’ll get the green arrows to turn left, and the east side will have to wait, and then they’ll move separately. You’ll get what we call an ‘exclusive’ green arrow.”

Cimino also said that visitors and residents should expect even more traffic safety messages being delivered through various media before and during the summer. Most importantly, TV and radio spots featuring a safety message from the Ocean City Police Department are in the development stage. Such messages, Cimino said, could be broadcast in areas of Pennsylvania and other states from which the city receives the bulk of its summer visitors.

The SHA may invest some of its media dollars into putting traffic safety messages on the planes and boats that tow advertisements across the beach in the summer, Cimino said. He is also working on a program to get restaurant servers to remind guests about crosswalk use.

“We want to get the restaurant owners to buy into having their waiters or bar staff be part of the message,” Cimino said. “If you get that beat into your head every time you eat, it’s got to stick.”