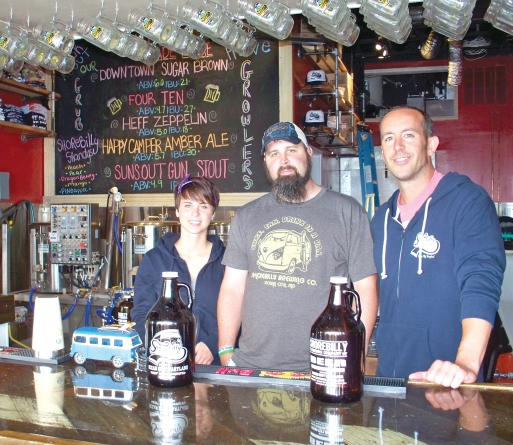 (June 21, 2013) Shorebilly Brewing Company, on the Boardwalk at 10th Street has only been open about a month and its brews have already developed quite a loyal customer base.

“Things are going very well. Exactly what we wanted to happen is happening,” said owner Danny Robinson. “We’re building a local following, one person at a time.”

Robinson said people were loyal to the brand immediately.

Through social media, a number of people have been part of the experience since Robinson decided to bring a brewery to Ocean City. He sought public input on Shorebilly’s logo design, as well as helping naming a stout. Recently, Shorebilly teamed up with Tumbleweed & Eddie’s of Fenwick Island, Del. The company makes all natural, vegan, wheat-free, dog biscuits using the brewery’s recycled brewing grains. On Shorebilly’s Facebook page, people can suggest a name for the new biscuits. The winner will receive two free bags of treats.

“People enjoy being part of the process,” he said.

When the space next to Hammerheads bar and restaurant, which Robinson also runs, became available last year, he jumped at the opportunity.

“I felt there was a pressing need for Ocean City to have its own beer. A local, homemade beer with local ingredients to call its own,” he said. “I love the Boardwalk. I could have built a brewery anywhere, but it being an Ocean City beer, it had to be on the beach and Boardwalk.”

Since there wasn’t enough time to get a brewery up and running last summer, he opened an ice cream shop in the unit.

In the fall, he started construction on the brewery. The inside was gutted, going down to the cement. Meanwhile, Hurricane Sandy wiped out the deck in front of the unit.

Throughout the winter, Robinson and his brewmaster, Robb Dunne, experimented with different blends and flavors using the equipment at Tall Tales Brewery in Parsonsburg, Md.

When Shorebilly Brewing Company first opened, two beers were available on tap – Kolsch, a light-bodied brew, and Downtown Sugar Brown, a cinnamon-infused ale. Now, five are offered and eventually six will be featured all the time, Robinson said.

Three beers will always be available – Downtown Sugar Brown, Kolsch and an Intergalactic IPA. Three others will vary. Robinson said he is currently working on a maple French toast beer that will be available in a few weeks.

Can’t decide which beer to try? Four-ounce samplers are available. Holes have been cut out of skateboard decks and the sampler glasses are placed inside them.

Four 15-gallon kegs can be brewed at a time. Kegs are brewed twice a day. The batches take about two to three weeks to ferment.

Quarter- and half-gallon growlers can be filled for customers to take with them. This option has been quite popular, Robinson said.

“We sell a ton of growlers on Sunday. People are getting them when they leave town,” he said. “They make a cool souvenir also.”

The outdoor deck, which seats about 40 people, is Shorebilly’s biggest attraction, besides the beer, Robinson said. The front portion of a VW bus can be found on the deck, colorfully painted by local artist Angelica Clemmer. Patrons can sit in the van’s front seats and enjoy their beer.

Five stools made from recycled beer kegs are available for customers to sit on at the bar inside. The bar top was constructed from boards that previously lined the Boardwalk. The wooden cypress planks that line the walls of the brewery and trim the growler case are from an old Snow Hill farmhouse. Colorful recycled skate decks adorn the bar.

A grand-opening event and ribbon cutting ceremony took place May 29 at the brewery.

“I’m absolutely happy with how everything’s going,” Robinson said. “What I’m most happy with is that we’re building trust in our brand, which is tough when you’re experimenting with different batches.”

Robinson said he would like to produce batches for different charities. Representatives from charities or organizations will have the opportunity to pick some of the ingredients, the flavor and name of the beer. All proceeds from sales of that specific beer will be donated to the charity or organization.

Robinson said his plan is to expand the company. He hopes to put Shorebilly beers in Ocean City bars and restaurants in the near future, then eventually take his product statewide and nationwide.

“I’m looking forward to the rest of the summer,” he said. “So far, the response has been huge. People are glad to see something new and different.”

Shorebilly Brewing Company is open daily from 11 a.m. to 2 a.m. Shorebilly merchandise, such as T-shirts, trucker-style hats and skate decks with the Ocean City and Maryland flags combined, are available.