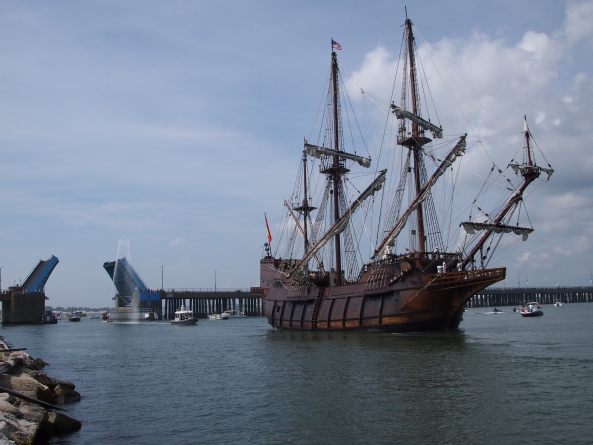 (July 4, 2014) Although a month-long event is still in the works for the August arrival of the Andalucia in Ocean City, its sister ship – the Nao Victoria – will not be coming to the resort.

“It looks like the second ship is not going to be in Ocean City,” said Cathy Bassett, spokesperson for the National Air, Sea, and Space Foundation. “It’s going to have to go back to Spain for repairs.”

Earlier this year, the NASSF – the non-profit group run by OC Air Show promoter Bryan Lilley – had arranged to host two replica vessels from the golden age of sail in the resort this summer, following the successful visit of one ship last year.

That vessel, known as El Galeon Andalucia, is still slated to be in Ocean City from August 1 through September 1. But the Nao Victoria, a more accurate replica of an even older vessel, will be returning to Europe for repairs after experiencing mechanical issues during appearances in Florida earlier this year.

Furthermore, even if the Nao Victoria was seaworthy, Ocean City may still have had trouble hosting it due to water depth issues in the channel running under the Route 50 Bridge, which serves as a passage for the large vessels to berth on the bayside walk between Second and Fourth Streets on Chicago Avenue.

“There is still some dredging that would have to be done,” said Frank Miller, Special Events Director for the town. “We had the Army Corps of Engineers contractors in here, but they had a very short window of opportunity to fit it in. You can see the difference, though, where they were able to dredge.”

The city was able to have federal contractors, brought in by the Army Corps for beach replenishment earlier in the year, perform limited dredging in the bay. The amount left for the city to do next year, Miller said, is very minimal.

“There’s not much left, but even if you have one spot that could be a hang-up, it creates a risk,” he said.

Although the Andalucia was successfully able to navigate the drawbridge channel last year, the massive vessel actually sits higher in the water than some of its smaller counterparts. This is because the Andalucia is part fiberglass, unlike the Nao Victoria and other more accurate replicas which feature all-wood construction.

Miller noted that the city fielded some interest from the Pride of Baltimore in coming to the resort this year. But, like the Nao Victoria, the Pride is all-wood and has a draft of over 12 feet in depth.

“There was a definitely a threshold there that they could consider trying to bring her in, but it would’ve had to have been optimal conditions,” Miller said. “There’s no need to take that risk right now. We have plenty of years to work on expanding the ‘tall ship’ attractions in Ocean City.”

Both the Andalucia and the Nao Victoria are owned by the Nao Victoria Foundation, a Spanish nonprofit group that promotes historical events relating to the 16th- through 18th-century glory days of sail, often know as the age of “tall ships.” The foundation’s namesake vessel is a perfect replica of original Victoria, the ship used by Ferdinand Magellan’s expedition to circumnavigate the globe in 1521.

But even just the Andalucia, the resort will be able to take advantage of an interesting tie-in. The vessel was used in shooting the NBC series Crossbones, which premiered May 30 and start John Malkovich as a fictionalized version of the infamous pirate Edward Teach, commonly known as Blackbeard.

“The final couple episodes of the season will be airing while the ship is in Ocean City,” Bassett said. “We’re planning a couple fun things to go along with that.”