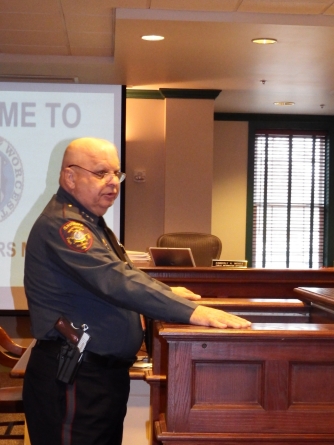 If the Worcester County Commissioners grant his request, his office would have a budget of $6.99 million, an increase of $752,041 over the current budget of $6.28 million.

That requested increase includes $189,535 for salaries for additional deputies, part-time employees and increased hours for school safety deputies, $121,795 for law enforcement maintenance, supplies and equipment and $431,157 for new vehicles.

The biggest portion of the requested budget for personnel, $5.33 million, is 4 percent higher than the current $5.13 million and is expected to continue to grow in future years.

So many calls for service originate from West Ocean City and the Super Walmart on Route 50 near Route 589 that Mason said he could use one full-time deputy just in that area, primarily because of thefts from stores.

“And wait until the new places get built at Walmart,” he told the commissioners during their March 11 budget work session.

He said it is time to “start looking at hiring a few new people each year. On our north end, we’re really growing.”

An additional part-time school safety deputy is requested for Stephen Decatur High School, because the present deputy assigned there is swamped with work, getting six and seven calls each day, said Lt. Michael Bowen, supervisor of the School Security Division.

Some of those calls are for cases that require emergency petitions, when a student is in need of mental health evaluation and possible treatment. Those calls have increased at the high school and when they occur, the school safety deputy must transport the student to Peninsula Regional Medical Center in Salisbury because Atlantic General Hospital in Berlin “does not do emergency petitions. It’s out of their protocol,” Bowen said.

Commissioner James Purnell, a school bus contractor, said he was aware of such problems. A female student had tried to jump out of his bus one day while he was driving.

Purnell also said many secrets were kept in schools and if the county did not have deputies in the schools, “we’d be in trouble.”

Recent state changes about discipline in schools are expected to increase the workload for the school deputies because the number of suspensions are supposed to decrease. Bowen said if a student may not be sent home, he would “really act out.”

Deputies are also being asked to make students attend classes.

Mason said some parents call and say, “‘Come to my house and make my kid go to school.’ Parents are calling police to make their kids go to school.”