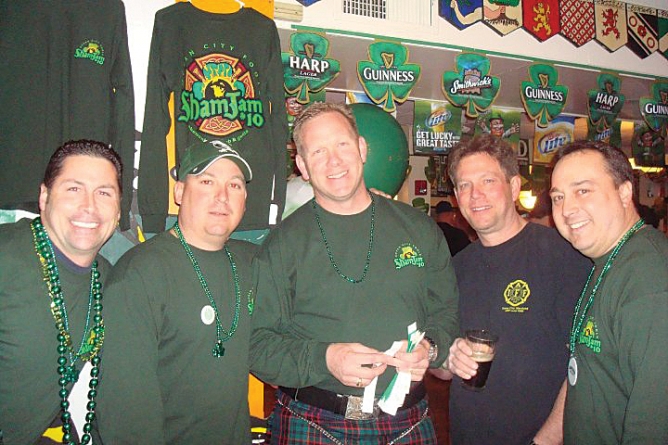 The party will begin at 5 p.m. at 45th Street Taphouse and OC Steamers in the 45th Street Village in Ocean City.

The cost to participate is $10, which includes a souvenir event pint glass, drink specials and live entertainment by Johnny Bling at 7 p.m. Sham Jam T-shirts and food will be available for purchase. There will also be a 50/50 raffle.

Feldman said he is expecting an even larger crowd this year. The resort’s annual St. Patrick’s Day parade is set to take place the following day.

“It’s a good kickoff to the St. Patrick’s weekend in Ocean City,” he said.

Sham Jam will benefit the Ocean City chapter of the Fraternal Order of Leatherheads Society (FOOLS) International for advanced firefighter training. A portion of the proceeds will also be donated to the National Fallen Firefighters Foundation.

The United States Congress created the National Fallen Firefighters Foundation to lead a nationwide effort to remember America’s fallen firefighters. Since 1992, the nonprofit foundation has developed and expanded programs to honor the country’s fallen fire heroes and assist their families and coworkers.

In 2010 and 2011, the OC FOOLS chapter donated a total of $5,000 to the foundation. The donation represented proceeds from the annual Sham Jam events and the group’s annual Brotherhood Block party, held in conjunction with the firemen’s convention in June.

Last year, the OC FOOLS chapter, which has more than 100 members, presented the foundation with $7,500.

For more information, visit the Ocean-City-FOOLS-Alpha-Chapter Facebook page or call Feldman at 410-365-7344.

Corporate sponsorship opportunities are also available for the Brotherhood Block party in June.