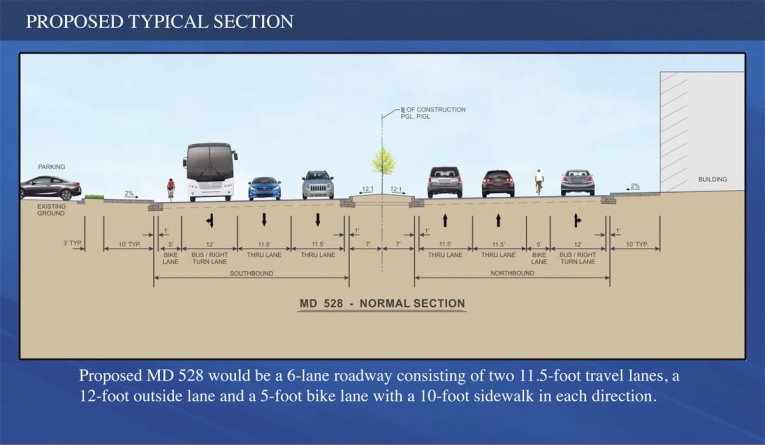 For the next several months, there are likely to be a number of opinions on what exactly that combination should be in Ocean City.

The State Highway Administration presented the City Council this week with the next phase of conceptual design for improvements on Coastal Highway, specifically the “road diet” initiative that has been floated to reduce pedestrian accidents following the problematic summer of 2012.

“What we’re showing here is a reduction of one lane [northbound and southbound],” said SHA Traffic Engineer John Webster.

“There are a number of options we can go with. Maybe we make the outermost lane a shared bus and car lane, or bus only. The bike lane could also be a pocket lane, or up against the curb.”

In short, the idea of a road diet would be to pull one southbound and one northbound lane out of Coastal Highway from the Convention Center to the Route 90 Bridge. This would create extra space needed to widen the sidewalks and build a proper bicycle lane.

The project would also include some type of renovation to the median strip itself to discourage pedestrians from crossing outside of designated crosswalks.

The stretch of Coastal Highway being looked at for the road diet renovations was chosen due to its high number of pedestrian accidents. The summer of 2012 raised considerable concern about pedestrian safety in the resort, with several major incidents including two deaths.

From January 2008, when the SHA began collecting data, through the end of August 2012, the stretch of highway between the Convention Center and the Route 90 interchange saw 47 pedestrians hit.

The SHA’s subsequent survey, Webster said, revealed that 27 percent of pedestrians typically cross mid-block, despite the public awareness campaigns sponsored by the Town of Ocean City and the SHA.

“There are several stretches with over 1,000 feet between marked crossings,” Webster said. “The issue is that pedestrians are not willing to go that distance between crossings.”

The road diet would have several effects: traffic would slow down, pedestrians would have less distance to cover at the crosswalks, and wider sidewalks would allow pedestrians to pass each other without going out into the road.

This is particularly vital in the mid-town stretch, which features heavy pedestrian traffic, particularly at bus stops. Popular bars, including Seacrets, Macky’s and Fager’s Island, are located along the stretch that would be subject to the road diet effort.

The SHA’s traffic study, Webster said, indicated “that the levels of service are all very good, even without the removal of a lane.”

But resort officials were not convinced that jams would not occur. Although the SHA has the data, none of the engineers present at Tuesday’s council meeting had been to the resort over the summer.

“I would make sure you take the opportunity to do that,” Mayor Rick Meehan told the group. “You can run a lot of engineering studies and programs, but you need to be there to see it.”

The question, then, assuming that the road diet will not create a traffic meltdown on its own, is how to configure the remainder of the roadway.

City officials generally seemed to lean toward maintaining a designated lane for buses and right turns, and restrict through traffic to two lanes.

“My concern would be that if we allow cars in that (bus) lane, it will slow down the buses … which will drive people to not take the bus and get in their cars, making the problem worse,” Mayor Rick Meehan said.

The location of the bike lane also has several options, the most intuitive being to have the bike lane on the far right, between the bus lane and the curb. This would cause conflict with right-turning traffic, however, and force bikers to stop for pedestrians filing into the bus.

The other option would be to have the bike lane between the right through-lane and the bus/right turn lane, a so-called “pocket” bike lane. This, however, is typically used with more commuter-oriented traffic.

“Some feel that, with younger bike riders, they prefer to have them away from the heavier traffic,” Webster said. “The SHA goes with pocket lanes for more mature riders because they like to ride faster and not be delayed by right-turn traffic.”

Given Ocean City’s population of family tourists, the pocket was seen as a no-go. But the curbside bike lane could be improved by using “bike tables” at the bus stops. These would be raised strips that bike riders could go up and over, but would provide a marked path for pedestrians to get on and off at bus stops.

“I was really impressed with that idea in particular,” said Councilman Dennis Dare. “The bike lane between the lanes – I just don’t known how that could work here.”

The third major question would what to do with the median strip, with the consensus being that some sort of barrier to block pedestrians from crossing outside of the designated intersections is needed.

This could be some sort of greenery, but it would have to be substantial.

“You’d have to have very dense, thick plantings that require some maintenance,” Webster said. “It also creates a screening effect. Drivers are not going to be able to see people crossing until they come out from behind the angle of the plantings.”

Another option would be some sort of fence that would not completely obstruct vision, which was also seen as being better for business.

“It think it needs to be something that’s somewhat transparent,” Meehan said. “You have to be able to see through to what’s on the other side of the road, or otherwise you’re going to have a lot of complaints from local businesses.”

The council also raised concerns about the incorporation of lighting – ideally LEDs – into the median for better visibility.

“If this is all about pedestrian safety, that’s very important,” Meehan said. “I haven’t seen anything about lighting in the median strip.”

The other issue that the city would like to see addressed is Coastal Highway’s drainage, which is problematic through the entire length of the road and not just between the convention center and the Route 90 Bridge.

Since the resort’s ocean side is higher than the bay, rain runoff drains east-to-west, but is blocked by the median and pools in the northbound lane of Coastal Highway.

“For me, this all goes back to the storm drains,” Dare said. “When the SHA first develop the project, the road was super-elevated, not crowned, and the water goes toward the bay. The median effectively becomes a dam.”

Although storm drains are placed along the western side of the northbound lane, there’s nothing to make the water go there.

“Draining Ocean City is like draining a pool table,” Dare said. “There are eight pockets, but it’s not downhill to any of them.”

One option would be to remove the raised median strip, and instead replace it with an area of grass or low vegetation with a slight U- or V-shaped dip to it, known as a “swale.” This would serve to absorb the water.

The SHA plans to hold public comment meetings this January and February. Design finalization would take over a year, and construction would likely not begin until the fall of 2016.

The project would range in cost from $15 to $25 million, Webster said. The SHA is currently funded for $2 million in design work, but construction funding is not yet secured.