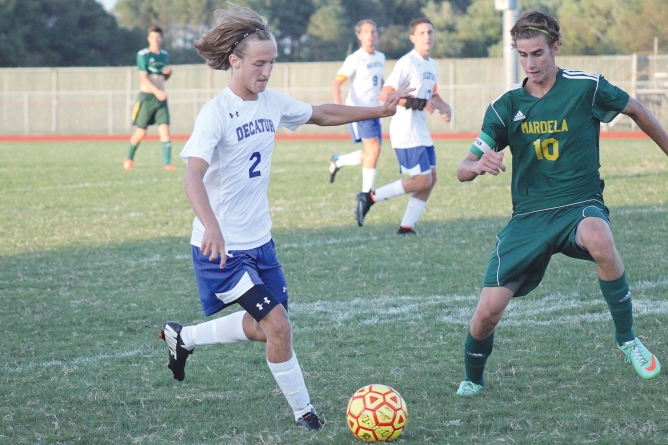 (Sept. 19, 2014) The boys’ soccer match between Stephen Decatur and the Mardela Warriors was a physical battle, but after some line-up adjustments, the Seahawks prevailed, winning on their home field, 2-0.

“It was a tale of two halves. It seems to take us a half to get going,” said Decatur Coach Jamie Greenwood.

The game on Monday was scoreless at halftime.

Greenwood said he and Assistant Coach Mike Cericola, who watched the first half from the stands, noticed some things that needed to be changed.

During the halftime talk, Greenwood said the coaches discuss players’ roles, how the boys need to communicate better and pass the ball to space.

“We made changes in all aspects of the field. We put a different line-up together for the second half,” Greenwood said. “I think the puzzle pieces are finally coming together.”

The biggest move, Greenwood said, was dropping senior captain Evan Heim back from the forward to midfield line.

“He and [sophomore captain] Alton [Walker] are key together,” Greenwood said. “In the second half we generated so much more offense.”

With about 23 minutes remaining in the game, Walker’s corner kick floated to the center of the goal and junior Jack Hammond headed the ball past the Mardela keeper.

With about 11 and a half minutes on the clock, Heim beat the Mardela goalie to a loose ball and scored to give Decatur a two-goal cushion.

The Warriors had a few offensive opportunities, but Decatur senior goalkeeper Sean Colgan stopped them. He recorded nine saves.

“I thought we definitely moved the ball much better and communicated much better in the second half,” Greenwood said.

Decatur will host the Crisfield Crabbers on Monday at 5:30 p.m.