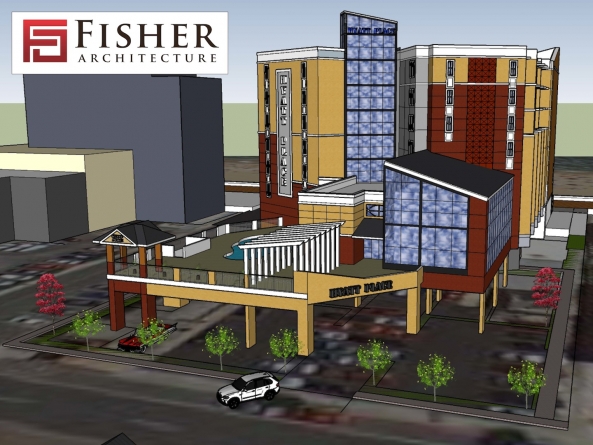 (Jan. 16, 2015) While not exactly a full pardon, the landmark Sea Scape Motel has at least received a stay-of-execution.

Plans to raze the building and construct a new Hyatt-branded hotel – a process originally intended to start this month – have been pushed back until fall 2015.

This will leave the Sea Scape, located on the Boardwalk and the south side of 16th Street, open for one final season. It also will give tenant businesses, including local favorite Pepper’s Tavern, a chance to stay open through the coming summer as well.

The change of plans caps weeks of speculation from the city’s Planning and Zoning Commission that Hyatt would not sign off on a franchise agreement with the property’s owners due to a lack of parking.

Due to the labyrinth of grandfathering clauses in the city’s zoning code, the commission was obligated sign off – reluctantly – on the project, despite its sub-standard parking. The property, as currently approved, will provide 153 parking spaces to service 170 hotel rooms, plus four employee apartments and restaurant, retail, conference, and wedding venues.

But Hyatt’s own requirements for flagship franchises may not give such consideration.

“The project is still moving forward, we have been finalizing our drawings and are in contact with the group of designers at Hyatt,” Keith Fisher, the architect for the project, said in an email.

The property’s future was also complicated last year with the death of Pepper’s Tavern owner Dennis “Denny-O” King, whose business has occupied the basement of the Sea Scape for years.

The lease on the Tavern was a year-to-year agreement with an annual renewal clause, according to Buck Mann, King’s close friend and fellow businessman who is serving as the executor of his estate.

“There is an option in there. Hopefully, we will be able to get one more year out of it,” Mann said. “If the opportunity is given to us, and from what I’ve been told, it will be, then the intent is to renew. We need to provide the staff with jobs for one more season, and hopefully make some money to pay the bills Denny-O left behind.”

As reviewed by the Planning and Zoning Commission roughly six weeks ago, the Hyatt development would consist of two buildings. The first would be an eight-story facility on the site of the current Sea Scape, with another five-story building directly across Baltimore Avenue on a lot currently occupied by several apartment houses, which are under the same ownership as the motel.

The property’s auxiliary parking lot, located a block south, would continue to be used as such, adding at least 40 parking spaces to the 113 that are proposed to be located beneath the two new buildings.

In Ocean City, a property that does not meet the current zoning codes, but was built before those codes went into effect, is allowed to continue to exist indefinitely. Further, if the property is razed, the owners have a two-year window to rebuild and retain rights to the same nonconformity.

This means that the Hyatt can be built to lack the same number of parking spaces as the Sea Scape historically has had. Being originally built with only 32 spaces for a motel of nearly 100 rooms, the Sea Scape confers considerable nonconformity rights to future redevelopments.

The Planning and Zoning Commission has recently discussed code revisions that would reduce such self-perpetuating nonconformities in cases where the scope of use has clearly outgrown the original property’s capacity.

The Sea Scape/Hyatt case was frequently cited as a problematic example in those discussions.

The property is jointly owned by a group of local families, and will continue to be locally owned even after gaining Hyatt sponsorship.