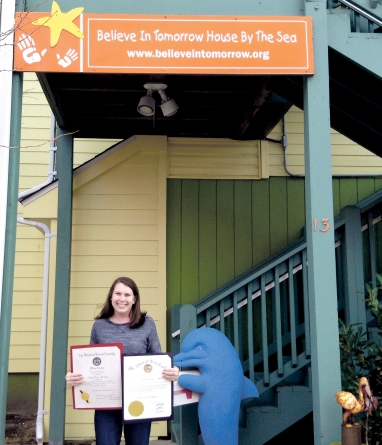 (Jan. 23, 2015) A senior at Stephen Decatur High School was honored at the end of last month for her volunteer work throughout the community in Worcester County.

Emily Scheiber has been volunteering since she was 12 years old and has completed more than 900 hours of volunteer work to date.

“I enjoy helping people. Seeing them happy makes me happy,” she said. “I want to make the most of my life and give as much as I can to individuals in need.”

The countless hours she dedicates to the community won her the 2015 WBOC Jefferson Award, in addition to citations from Senator James Mathias and Governor Martin O’Malley.

Early on the morning of Dec. 30, Scheiber arrived at the Art League of Ocean City on 94th Street thinking she was there to volunteer. In reality, she was surprised by family, friends and people representing the numerous organizations Scheiber has volunteered at throughout her nine years in the area. They were all there to celebrate and congratulate her on becoming a Jefferson Award winner.

“She has dedicated the largest number of hours and time to organizations that are close to her heart and she is passionate about,” Wroten said. “Anytime an organization reaches out and volunteers are needed, she is the first person to jump and dedicate herself to their cause.”

Donna Hoy, legislative aid for Mathias, presented Scheiber with the citation in honor of receiving the Jefferson Award. The citation from Gov. O’Malley was a complete surprise to Scheiber when it came in the mail a few days later.

This past summer, Scheiber received the Volunteer Spirit of Worcester County award. She was nominated by Rabbi Susan Warshaw from Temple Bat Yam in Berlin.

“I wasn’t expecting that at all,” Scheiber said.

Scheiber has volunteered at Temple Bat Yam since seventh grade and became a teacher’s assistant her sophomore year. This is her third year teaching historical events and the Hebrew alphabet to 4-6-year-olds on Sundays.

“The children love her at Sunday school and she is very good with them. Typically, the kids will sit on her lap as she helps them read or write. She is a huge help to me and takes care of the children if I have to leave the room for a moment,” said Marsha Rosenstock, a Sunday school teacher at Temple Bat Yam.

Scheiber has participated in yearly car washes, in addition to fall and spring clean-ups at the Temple.

Since freshman year, Scheiber has volunteered for the Believe in Tomorrow Children’s Foundation on 66th Street and became an intern in 10th grade. She has participated in various fundraisers including the organization’s annual gala, Springfest, Sunfest, arts and crafts and Sunday barbecues with the children.

“She has a great heart and is a good role model for young people in the community,” said Wayne Littleton, coordinator for the Believe in Tomorrow Children’s Foundation Beach Respite Housing Program.

She volunteers with a number of additional organizations including the Worcester County Humane Society, Camp Odyssey in Salisbury, Women Supporting Women, Ocean City Center of the Arts and at Stephen Decatur High School.

Additional volunteer work the 17-year-old has participated in include:

• Turning in more than 500 box tops for education in fifth grade to the Berlin Intermediate School.

• Volunteering for a fundraiser the past three years at Robin Walter Salon and Day Spa in Berlin for Breast Cancer Awareness month.

• Collecting clothing, shoes and toiletries for the victims of St. Paul’s By the Sea fire a little over a year ago.

• Volunteering at the Holly House holiday party in Salisbury, Fiddlers Convention in Berlin, the Showell Elementary Fall Festival, Winterfest of Lights and the OC Spook Out Halloween party at Northside Park

“I love making connections with people [and] having deep conversations that have meaning about things that matter in life and are challenging,” Scheiber said.

She was accepted early to Dickinson College in Carlisle, Pa. where studying French and International Studies are her interests.

Scheiber will continue her community service in college and plans on finding a job with volunteer work included. She has been looking at a couple programs involving under­-

privileged children and an organic farm.

“I want to continue throughout my life to help others. I advocate for individuals, at any age, to perform community service at any opportunity given,” Scheiber said. “I want to be completely filled with opportunities to help others as I move onto college and beyond.” 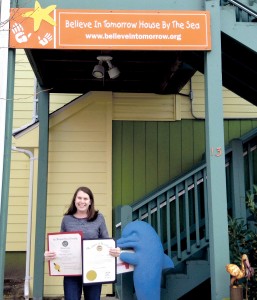 SDHS senior Emily Schieber poses in front of Believe in Tomorrow House, one of the many organizations she has volunteered with to generate more than 500 hours of volunteering. Schieber is holding citations she received from Senator James Mathias and Governor Martin O’Malley. She was given WBOC’s Jefferson Award at the end of last month.
Photo Courtesy of: Gail Schieber