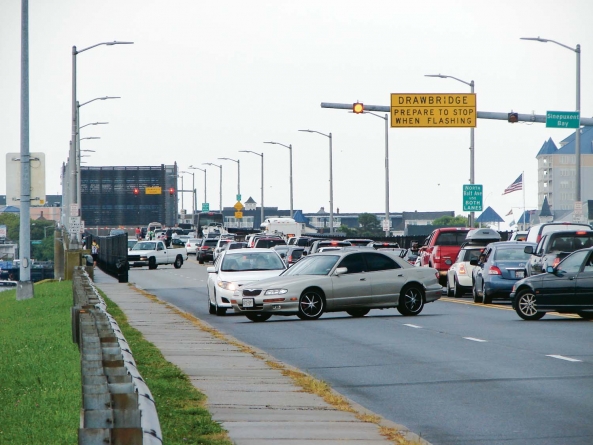 (Feb. 27, 2015) The State Highway Administration will begin repairs on the Harry Kelley Bridge on March 4 to replace mechanisms responsible for the July 26 outage that left the bridge stuck in the “up” position for five hours.

At the time of the malfunction, SHA spokesman David Buck said they would be back to effect repairs on the four main mounts, not just the one that failed leading to what has been called Ocean City’s worst traffic snarl in history.

The only other east-west entrances into the resort, Route 90 and Delaware Route 54, saw backups miles long as a sunny Saturday afternoon at the beach turned into anything but. The bridge was stuck between the hours of 3 p.m. and 8 p.m.

A gear on the southwest mounting was blamed for the failure, which left a five-foot gap between the leaves of the bridge despite monitors affirming the bridge was in the “closed” position.

“We’re going to repair all four for consistency,” Buck said this week.

Buck said, weather permitting, the repairs could be finished much sooner.

The SHA will not be conducting repairs between March 13-16 during the St. Patrick’s Day festivities, and SHA officials confirm there will be no lane closures on the Route 50 bridge during that time.