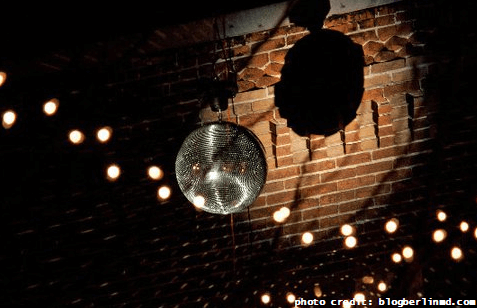 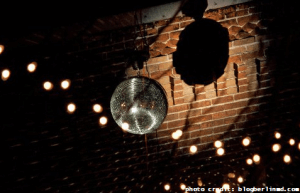 Sure, your favorite bar is probably running a New Year’s Eve special that includes drinks, snacks, party favors, and a champagne toast, all for one low price; but are you sure you want to ring in the new year at the same old place?  If you want to shake things up a bit, Ocean City, MD has plenty of other options for making the most out of your holiday. 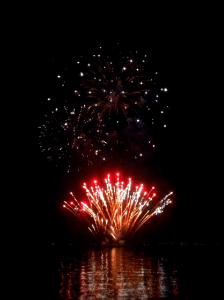 Elaborate fireworks displays are synonymous with the Ocean City experience, so it only makes sense that the year’s first big celebrations be accompanied by colorful bursts high above.  As the nationally acclaimed Winterfest of Lights extravaganza draws to a close, Northside Park on 125th Street will send it off with a bang.  Literally.  Enjoy extended hours at Winterfest before turning your attention to the sky above for a fireworks display for the ages.

In nearby Berlin, the nearly month long celebration known as Victorian Christmas will be winding down with 2013, but not before properly greeting 2014.  Each New Year’s Eve, Maryland’s Coolest Small Town transforms into a miniature version of Time’s Square.  But don’t let size fool you, this celebration brings in the new year in a big way.  The festivities begin at 8pm at the intersection of Main St and Broad St, including live performances, great food from local eateries, adult and kid friendly refreshments, music, dancing, romantic horse and carriage rides of holiday decorated downtown, giveaways, and more as the entire town counts down to midnight.  As the climactic moment of midnight approaches, Berlin’s New Year’s ball takes center stage as it dangles high above the town with residents eagerly awaiting its dramatic drop.  Make your plans now to spend New Year’s Eve in Berlin to experience big city fun with small town charm. 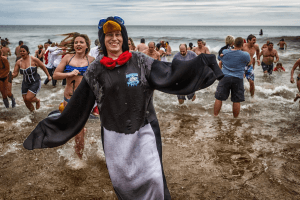 Each New Year’s Day, hundreds conquer their hangovers and gather on the 91st Street beach, in front of Princess Royale, for the most thrilling, and chilling, event of the entire year.  Now in its 20th year, the Penguin Swim to benefit the Atlantic General Hospital Foundation gives you the chance to “get wet for a good cause.”  The Penguin Swim has evolved into a favorite event of Ocean City locals as teams representing businesses and community organizations compete to raise the most money for AGH.  Get your new year off to a great start; take the pledge to take the plunge at this year’s Penguin Swim.

The Penguin Swim may be turning 20 in 2014, but it’s not the only longstanding New Year’s Day tradition in Ocean City.  As the calendar changes from 2013 to 2014, consider attending the 18th Annual Ocean City Mayor and City Council’s Annual Open House and get a behind the scenes look at the work of officials who make Ocean City such a great place.  City Hall, on 3rd St and Baltimore Ave, has been extravagantly decorated for the holidays and Mayor Meehan and other town officials will be in attendance to greet citizens.  The open house, which runs from 1-3pm, will feature exhibits from the OCPD, fire department, Emergency Services, Beach Patrol, and other town entities, as well as light refreshments and musical entertainment.  The theme for this year’s event has been dubbed, “Come Walk All Over Us” and will focus on the Ocean City Downtown Association.