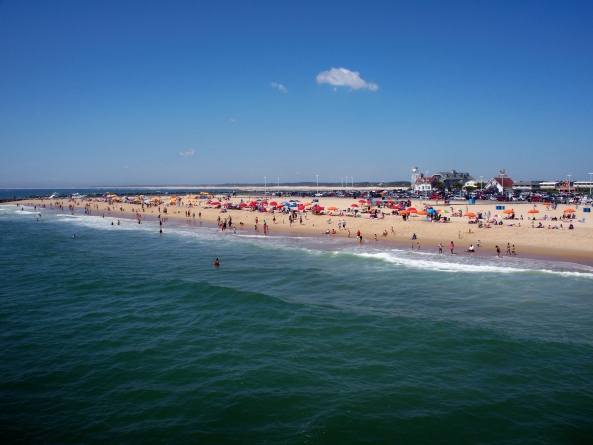 (May 30, 2014) The Memorial Day weekend in Ocean City wasn’t just good for many local businesses, it was outstanding, even record-setting in a number of instances.

One of those seeing records fall was Macky’s Bayside Bar & Grill on 54th Street where on Saturday the line to enter the restaurant stretched from the door, across the parking lot and up to the building of its predecessor, Tio Gringo’s.

That Saturday was its biggest sales day ever.

“It was our best Memorial Day weekend,” General Manager Carl Bozick said. “We had beautiful weather and great crowds.”

Carey Distributors, which supplies beer to Worcester and other Lower Shore counties, had its largest day of the year last Thursday, Vice President Terry Loughlin said.

“The weather was perfect,” he said. “It’s no secret, as long as the weather stays good, sales are good.”

Meanwhile, the lines formed outside of Seacrets as early as 8 a.m. as visitors staked their claim to a space in the 18-bar, indoor-outdoor complex. So busy was the 49th Street establishment that it had to shut its door intermittently throughout the weekend to maintain capacity, General Manager Scott Studds said.

“Everything went great. I think it was comparable to some of the better Memorial Days we’ve had,” he said. “Hopefully, it set a good tone for the rest of the season. We all dealt with such a harsh winter, we’re ready for good weather.”

According to the city’s Demoflush statistics, which estimate population based on wastewater usage, 251,193 people came to town over the three-day weekend — more than an 8 percent increase over the same weekend last year, said Jessica Waters, communications manager for the city.

“Everyone looks at Memorial Day nationally as the unofficial beginning of the summer season and I hope that this weekend is a testament to how great the rest of the summer is going to be,” Waters said.

Though she doesn’t have the numbers by weekend, Susan Jones of the Ocean City Hotel-Motel-Restaurant Association, said some member hotels booked out for Memorial Day and their advanced reservations “seem to be steady” for the upcoming summer.

“It felt busy. It felt really nice,” Jones said of the holiday weekend. “The horrible winter that … kept people inside definitely built up some demand. There’s a bit of optimism going into the season.”

While sunny skies and warm temperatures kept foot traffic on the boards and in stores high, the beach was a draw last weekend, too, Beach Patrol Captain Butch Arbin said.

The ocean hit an unseasonably warm 62 degrees over the weekend.

“The beach was packed. It was like the middle of August out there on Sunday,” Arbin said. “It was incredible.”

The traditional start of high summer season, Memorial Day weekend is when Beach Patrol lifeguards take to their stands in full force. They launched the season with a prayer service on the Boardwalk Saturday morning followed by a pre-season leadership meeting and were on guard by 10 a.m.

That proved necessary when a swell blew in Sunday, leading to about 100 rescues over the weekend, Arbin said. That’s high for Memorial Day, when the water is traditionally cold, but normal for later summer weekends with comparable water temperatures, he said.

Arbin is hopeful that the warm water is here to stay, drawing more people to the resort and its 10 miles of Atlantic shoreline throughout the summer.

“Having the water temperature as warm as it is right now indicates to me that it’ll stay warm this year,” he said. “It was a great opening.”

And while foot traffic was up, crime was not, the Ocean City Police Department reported.

The total number of calls for police service between Friday and Monday was 1,615 — 14 less than the same period last year, when there were about 20,000 fewer guests in town. Police made 108 arrests, up from 92 last year.

“Even though we saw many more visitors, our crime statistics for the weekend were on par with years past,” said Lindsay O’Neal, police department spokesperson. “It was a great start for us to the summer season and we are prepared to provide our citizens with another safe summer.”

While they hope the weather holds, business owners are cautious to forecast the summer based on one good weekend.

“We hope that it bodes well for the summer, but in all honesty, if it rains for the next month, then our business is going to drop down,” Bozick said, recalling last year’s season that got off to a slow, cold and rainy start.

“We are so weather-driven here. If the weather forecast is calling for rain, sometimes we don’t’ get the crowds we’re used to getting,” Loughlin said. “We just hope it doesn’t rain at all between now and Labor Day.”