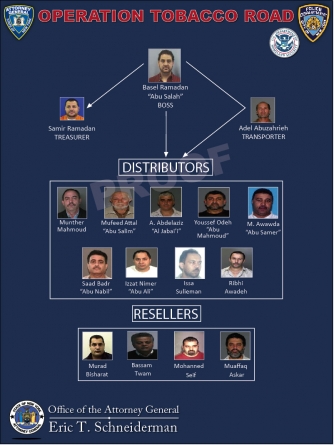 (May 24, 2013) The 303-page indictment of two West Ocean City brothers and their associates in an alleged multi-million-dollar cigarette smuggling scheme would seem to cover virtually everything. But the one thing that law enforcement officials do not know and are concerned about is where the money went.

Meanwhile, Basel Ramadan, 42, an Oyster Harbor resident and his brother, Samir, also of Oyster Harbor, were extradited to New York this week.

According to the indictment released last Thursday by New York Attorney General Eric T. Schneiderman, Basel Ramadan was the leader of the smuggling ring. A poster, entitled Operation Tobacco Road, released by the Office of the Attorney General of New York shows him as the boss. Samir Ramadan is pictured as the treasurer.

During the raid by Homeland Security officers and New York authorities of Basel Ramadan’s house last Wednesday, police found approximately $1.4 million in cash, some of it in black trash bags. Various items, including three handguns, were removed from the houses and vehicles were taken away.

Both men were arrested and taken to the Worcester County jail where they were held without bail. On Wednesday, Warden Garry Mumford said the brothers were still awaiting extradition New York.

The indictment said the scheme involved the purchase of cartons of cigarettes from a wholesaler in Virginia, ostensibly to sell them at Virginia businesses. That ruse allowed them to buy the cigarettes at a tax rate of 30 cents per pack. The cartons of cigarettes would then be transported to storage facilities in Delaware.

A storage facility in Dagsboro was raided last week. It had no sign indicating any type of business and its windows were covered so no one could see inside, where police found thousands of cartons of cigarettes bearing Virginia tax stamps.

An apartment above the Subway on Sunset Drive in Ocean City was also raided last Wednesday. Although the Ramadans own that Subway, they do not own the other Subways in Ocean City, Ocean Pines and Berlin area.

Adel Abuzahrieh, 42, of Brooklyn, was identified by the Office of the Attorney General as the transporter for the group. He allegedly drove several times a week from Brooklyn to Dagsboro, where he would exchange tens of thousands of dollars in cash for the cartons of cigarettes.

A press release from the Attorney General’s Office also said the Ramadans deposited “more than $55 million from their untaxed cigarette sales into small financial institutions in and around Ocean City” and used that money to buy more cigarettes to sell illegally. They also allegedly generated more than $10 million in profits from the illegal enterprise.

One of the alleged distributors, Yousef Odeh, 52, reportedly had ties with Omar Abdel-Rahman, the blind cleric serving a life sentence for a conspiracy to blow up landmarks in New York City. According to the indictment, Basel Ramadan had a telephone conversation on Feb. 1 with Odeh during which Odeh ordered more than 30,000 untaxed cigarettes from him.

One of the alleged re-sellers, Muaffaq Askar, is suspected of giving weapons to Rashid Baz, who was convicted of shooting up a van carrying Yeshiva students across the Brooklyn Bridge in 1994. One student was killed.

“The association of some of the suspects in this case to the Ari Halbestram’s killer, the Blind Sheik and a top Hamas official concerns us,” said New York Police Commissioner Raymond W. Kelly. “While it hasn’t been established yet where the illicit proceeds ended up, we’re concerned because similar schemes have been used in the past to help fund terrorist organizations like Hamas and Hezbollah.”

According to Schneiderman’s office, the year-long investigation by the Attorney General’s Organized Crime Task Force and the New York City Police Department, with assistance from Homeland Security Investigations, revealed the smuggling ring laundered more than $55 million in illegal proceeds and dodged at least $80 million in New York state taxes.

During the investigation, law enforcement seized more than 65,000 forged New York tax stamps that had not been affixed to packs of cigarettes and nearly 20,000 cartons of untaxed cigarettes. They also seized more than $200,000 from suspects located in New York City.

All of the suspects, charged with enterprise corruption, money laundering and related tax crimes, are facing up to 8 1/3 to 25 years in prison.