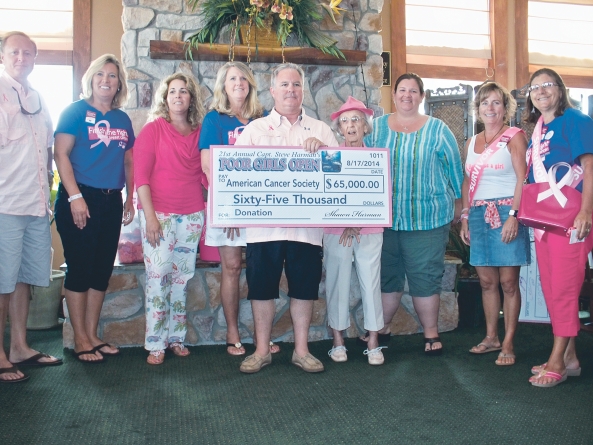 “It went very well. Ninety-six boats is a nice turnout,” said co-Director Earl Conley. “We were blessed with great weather and a good bite.”

The crew aboard Tighten Up released eight white marlin last Saturday to take first place. The group was awarded $31,640.

The ladies fishing on Fin Ness hooked six whites to finish in second place. They received $18,984.

Nancy Julio caught a 71.6-pound tuna aboard Rhonda’s Osprey, good for first place in the division. She was presented with $7,170.

Foolish Pleasures angler, Amber Kelly reeled in a 63.2-pound tuna. The second-place fish was worth $3,402.

Christine Schrader landed a 38.2-pound tuna on Let It Ride, which finished in third place. She took home $2,268.

Nancy Kohl’s 34.7-pound dolphin caught on Reel Toy earned her first place and $7,575. Tiffany Hudson came in second place in the dolphin division with the 29.8 pounder she hooked while fishing on Turn Me Loose. The fish brought in $3,645.

Marli angler Candice Bonczdwski’s 25.2-pound dolphin finished in third place. She was presented with a check for $2,430.

Many women make it a tradition to participate in the tournament annually, including cancer survivors. Although it is a competition, there is camaraderie among the lady anglers.

“I hear constantly from survivors how much they enjoy going out fishing,” Conley said. “This tournament is always a great time for a good cause.”

Women enjoy fishing in the tournament because it benefits a worthy cause — breast cancer research. Proceeds will be donated to the American Cancer Society and earmarked for breast cancer research and program development, under the “Pink Ribbon Classic” — a series of local events that benefit the organization. While some of the money is used for research on a national level, the remainder stays in the area to assist in local breast cancer awareness and patient programs and services.

Some of those include free wigs for patients; the Look Good Feel Better program, which teaches patients how to cope with the cosmetic side-effects of treatment; Reach to Recovery, a one-on-one support visitation program by trained breast cancer survivors for new patients; Road to Recovery, which offers patients transportation to and from medical facilities for cancer treatments;  Hope Lodge, lodging during treatment; Patient Navigator Program, help with the health care system; Cancer Survivors Network and a 24-hour/seven-day information center with oncology nurses or social workers. All of these services are free.

The Open is the first event of the Pink Ribbon Classic. The rest of the events will take place in October, Breast Cancer Awareness Month. Activities scheduled this year include tennis, golf and Mah Jongg tournaments, card, game and Mahj party/luncheon, Jammin’ Out Cancer celebration, Making Strides 5K run/walk, Crop Out Cancer scrapbooking and Pamper Yourself for Charity raffle.

Capt. Steve Harman and his wife, Pam, started the Poor Girls Open in 1994 to provide women with an opportunity to compete for prizes and money in a ladies-only tournament and to raise money for local charities. Harman died in February 2004, so organizers thought it was appropriate the tournament be renamed in his memory.

This year, tournament organizers and the Harman family presented a check for $65,000 to the American Cancer Society during the Aug. 17 awards banquet at the Ocean City Marlin Club. The total donated by the Harman family through the tournament and other events over the past seven years is approximately $450,000. Since the Open’s inception 21 years ago, the American Cancer Society has received about $700,000.

For more information about the American Cancer Society, visit www.cancer.org or call 1-800-937-9696.

The American Cancer Society is the largest source of cancer research funds in the country, next to the U.S. government.

To learn more about the Pink Ribbon Classic events, contact Josette Castiglione at 302-827-4936 or email josette.castiglione@cancer.org.