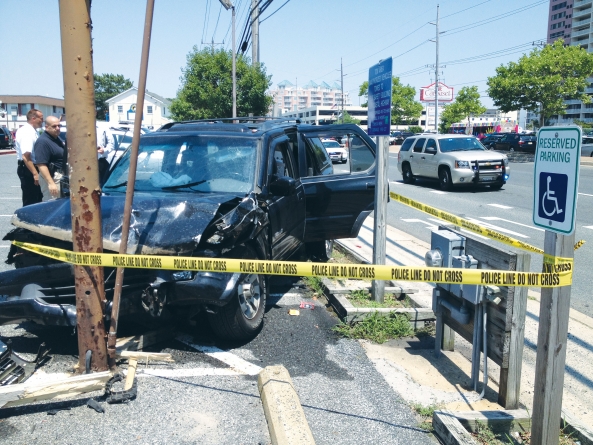 (July 26, 2013) Police confirmed this week that the man who fled police in Rehoboth Beach, Del., last week and ended up crashing his vehicle and fighting with officers in Ocean City had indeed threatened motorists with a machete and had fled from his home in Frankfort, Ill., violating his parole for a previous robbery charge.

Brion Kriss noticed that another motorist was observing him driving erratically around 10:15 a.m. last Wednesday, according to Gary Fournier of the Delaware State Police. Kriss allegedly pulled up beside the vehicle waving a machete and asked the driver if he would like himself, Kriss, to get out of the car.

Kriss was fleeing a traffic accident in a Rehoboth-area mall parking lot that occurred around 9:45 a.m., apparently concerned responding officers would discover he had violated his parole terms.

He has since garnered national media attention for the “getaway triathlon” he performed after consecutively running, biking and swimming away from officers.

Kriss tried to evade police by turning into the ocean block at 134th Street and then entering Coastal Highway at 133rd Street going north. When spotted, however, he made an abrupt U-turn – striking another vehicle – and headed south again.

While attempting to escape from stopped traffic around 118th Street at approximately 10:35 a.m., Kriss sideswiped a black Jeep, running it off the road and onto the front lawn of Supremo Cheesesteaks, witnesses said. The driver of the Jeep was taken away from the scene by Ocean City EMS with non-life-threatening injuries.

Kriss was able to keep driving down Coastal Highway for roughly two blocks until rear-ending another SUV and swerving his own vehicle head-on into the sign pole for the Oyster Bay Shopping Center in front of the Greene Turtle.

Kriss immediately got out of the vehicle and ran down Jamestown Road, with the two Delaware officers giving chase, employees said. He eventually stole a bicycle, according to the OCPD, and headed south in the area behind the Gold Coast Mall.

With OCPD officers, who had been alerted by Delaware police, closing in, Kriss jumped into the bay off 112th Street. According to witnesses, he began scrambling through the marshy area bordered by Jamestown Road to the north and Channel Buoy Road to the south.

Although surrounded, Kriss proved extremely difficult to apprehend. He evaded officers, as well as a police dog, despite having multiple Electronic Control Devices used on him. Eventually, a less-than-lethal projectile launcher that fires high-velocity rubber missiles was used to bring Kriss down to where he could be restrained.

When fleeing, however, Kriss did not take the machete with him. It was recovered in his vehicle, according to police.

A toxicology report has yet to come in, Lindsay O’Neal of the OCPD said this week. However, Kriss has already been charged with numerous offenses related to intoxicated driving and officers widely believe he was under the influence of a substance that allowed him to resist pain and physical disability.

Kriss was also charged late last week with resisting arrest, assault, weapons possession and inflicting bodily harm on a law enforcement animal, a charge resulting from him apparently actively fighting off the K-9 unit used against him in the marsh. The dog’s injuries were not severe, police said.