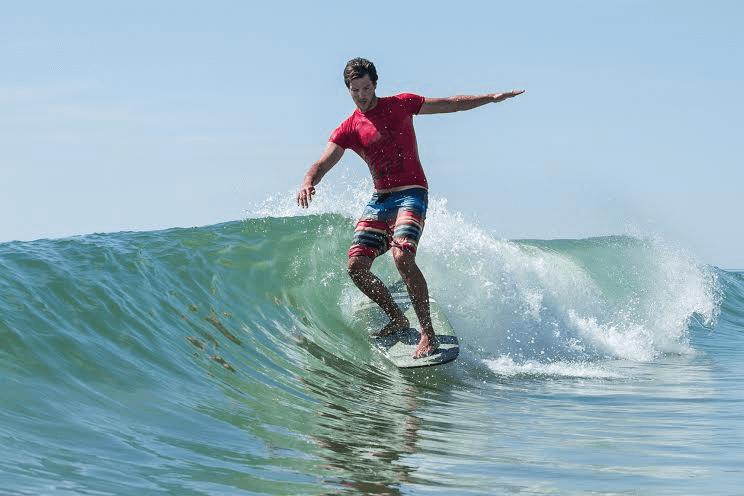 Wyatt Harrison has traveled the world in search of warm weather and good surf, but on this particular day he stands not on the edge of the ocean with his board in hand, but rather in his West Ocean City workshop, hunched over a massive machine that looks like a combination computer scanner and copier on steroids. Harrison preps his prized possession, which is actually one of the few industrial printers on the planet capable of completing his unique projects, for the day’s first round of printing.

First on his to-do list is producing dozens of trophies for the Eastern Surfing Association, like those he won at amateur surfing competitions when he was younger.

Next, he will print countless custom photographs and designs on planked wood that will wind up on walls all across the world. 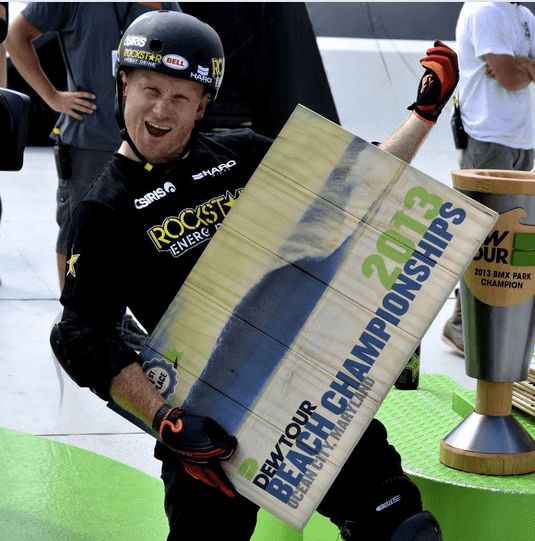 Before too long, Harrison will turn his attention to the awards for the annual Dew Tour Beach Championships, which he’s been printing for a couple years. He remarks how awesome of a feeling it is knowing that BMX legend Ryan Nyquist and skating icon Bucky Lasek (who he grew up watching) have Harrison’s plaques in their homes.

This is a typical day at the office for a man whose career is anything but typical.

Harrison, who was born in Ocean City, spent 13 years working at Malibu’s Surf Shop during the summers. During the winters, he bartended and worked in other surf shops while traveling to places like California and Australia- where the seasons are opposite of our own and surfing conditions are at a premium- until his visa expired early in 2012. That spring, however, while visiting his brother in California, Harrison came face to face with his future.

Wyatt and his brother were hanging out at a local bar when a decorative beer sign on the wall caught his eye. The sign was unique because it was printed on wood, which piqued Harrison’s interest enough to take it off the wall to see who the manufacturer was. Luckily for him, the company name was inscribed on the back and he contacted them to see if photographs could be printed on wood as well. They could.

Harrison knew his boss, Lee, at Malibu’s was always searching for new ideas and products stemming from his employee’s travels. Harrison also knew Lee had an endless supply of amazing beach photos and thought selling wood prints of them would be an instant hit with customers of the surf shop. Wyatt’s hunch was spot on and throughout the summer of 2012, Lee’s photos were printed on wood by the California-based company and sold at Malibu’s with tremendous success. 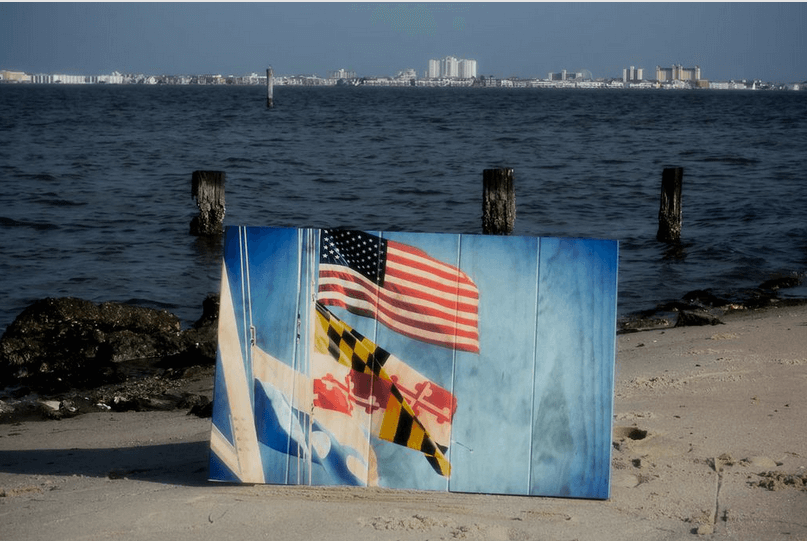 During that time, Harrison was doing all of the design work and creating the templates before the photos went to the west coast printer. One day a guy came into Malibu’s asking if the wood application could be used to print a photo of his family. Almost instantaneously, a light bulb went off in Harrison’s head as the idea for his own business began to take shape. When Wyatt got home from work that same night, he started a website to sell photographs printed on wood, and the concept of Plak That was born.

Now, Plak That (a combination of plaque and plank designed to keep the company from getting lost in the search engine shuffle) gets a “new request every day” for different projects. Between customers ordering custom prints of their own photos from his website and the local community coming to him with various ideas throughout the year, no two days are the same; but it wasn’t too long ago that Harrison was doing everything in his power to get his company off the ground.

During the initial phase of his start-up venture, Harrison collected pictures and designed templates for orders that were printed by the company in California and shipped back to OC to be sold. In order to make the process profitable, Harrison had to accumulate mass orders to get bulk discounts. He quickly learned this system was much too confusing and expensive and knew he needed a printer closer to home. He called nearly every printing shop in the mid-Atlantic region trying to find one willing to undertake his project, but all said no because they were not equipped for printing on wood. In addition, the proximity of sawdust to an expensive printing machine turned most away.

After a seemingly endless search, Harrison finally found a printer in Salisbury who had both the ability and willingness to print on wood. From August 2012- August 2013, Harrison designed templates and drove to Salisbury as many as 3 times per week to drop off orders and pick up them up to be shipped- even forgoing his usual winter traveling to focus on growing his business. As Harrison’s volume increased, it became more difficult for the commercial printer he was working with to keep up with the demand. 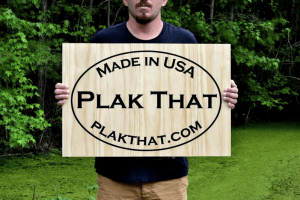 With Plak That growing steadily in the spring of 2013, Harrison realized that if he was bringing enough volume to Salisbury to make it worth the printer’s time, he was accumulating enough orders to do the printing himself. In March of 2013 he decided to bring his entire operation in-house in order to grow the business and make it as profitable as possible.

Having studied anthropology at the University of San Diego, however, Harrison’s only real business training was through work experience and he did not know where to turn next. So, in April 2013 he reached out to the Small Business Development Center at Salisbury University for advising. He worked with Lois Haggerty (who also advised Burley Oak Brewing Co. owner, Bryan Brushmiller, when he was starting out) on his business plan, which was finalized in May 2013. With a plan for success in place, Harrison purchased a shop in West Ocean City, and, under Haggerty’s direction, applied for and received a VOLT Loan (Video Lottery Terminal) designed by the state to appropriate revenue generated by casinos to aid small businesses that big banks won’t invest in. It was with that loan that Harrison purchased the massive printer necessary to handle all orders on his own. 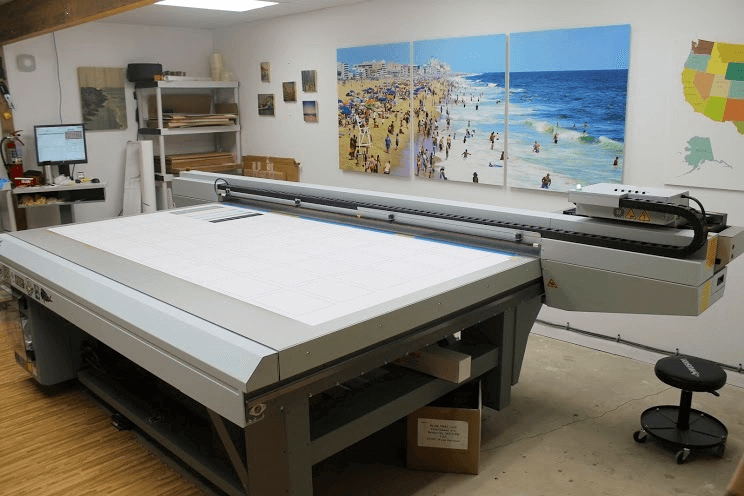 The printer arrived in August 2013 and Harrison hasn’t looked back. Since then, Plak That has evolved from a small, outsourced business into a full-service printing shop. When he started, Wyatt thought his bread and butter would be printing his own beach photos on wood and selling them as gifts online, but he quickly saw high value in allowing customers to use his services to print their own pictures. He also discovered that not only is his printer capable of handling wood prints, but it can print on aluminum, acrylic, and pretty much any material that lays flat. Harrison has used this to his advantage and now, in addition to a plethora of wood printed photos, Plak That is cranking out decorative pieces, trophies and commemorative plaques, custom table tops (such as those found in Barn 34), and outdoor signage for businesses and real estate companies in Ocean City and beyond.

Harrison attributes the success of Plak That, which ships worldwide, to a number of factors. Moving the printing process in-house has certainly been integral, but so has his connection to the local community, people’s desire for unique products, and the time in which we live. More and more people have the ability to take great photos and Plak That provides a unique and creative way of displaying them. Harrison just recently had his website updated to be mobile-compatible because more than 50% of the traffic was from smart devices and tablets which previously didn’t work on his site. By keeping up with the pace of technology and continually finding creative ways to use his printer, Harrison and Plak That have been able to flourish. 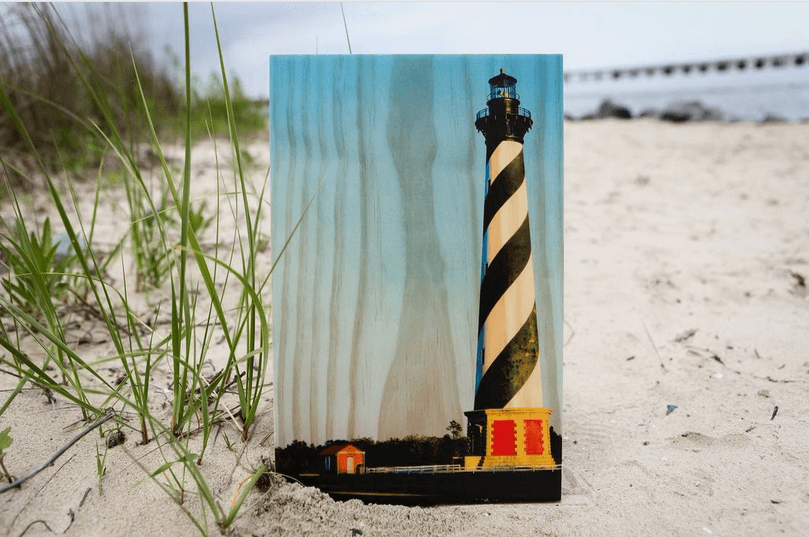 Although he is not exactly sure what the future will hold for Plak That, the endless possibilities certainly have Harrison excited. He is currently redoing his workshop with better equipment and more space to accommodate the multitude of orders placed through his website, as well as larger orders for the Dew Tour, ESA, and whatever organization or business calls next.

Chances are they will be calling sooner rather than later, and Harrison will be eagerly waiting when they do. He may be one of the few (if not only) people in the world printing on high quality, planked wood, but, for now, Harrison is happy letting his clients dictate the projects and, in turn, shape the direction of his business.

Like catching a great wave off the coast of one of his favorite beaches, he is thrilled to be along for the ride.