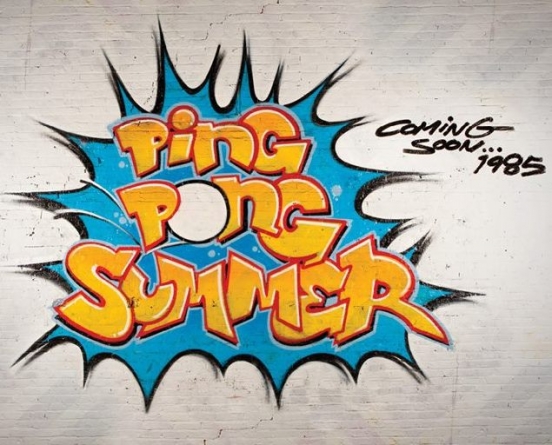 Rad Miracle stares intently out the back seat window as his family turns off of the Route 90 bridge. A smile crosses Rad’s face as his family finally lands in Ocean City, Md and his eyes catch glimpses of signs identifying local staples such as Dunes Manor, Belly Busters and The Dough Roller as they flash by in montage. The year is 1985 and Ocean City is in full summer glory.

Ping Pong Summer, which received rave reviews at the 2014 Sundance Film Festival, has been a passion project of writer/director Michael Tully’s for over ten years; however, he started working on the script even before that; in his senior year of high school. Tully, originally from Frederick, Maryland, had frequently visited Ocean City as a child.

Tully’s  passion for Ocean City comes out in almost every frame of Ping Pong Summer as our hero Rad (newcomer Marcello Conte) experiences OC as only a 13 year old on vacation can. Iconic Ocean City locations abound including Phillips Seafood House, Dumsers Dairyland, the Paul Revere Smorgasbord and the H20 Nite Club. A particularly memorable scene features Anthony’s Beer, Wine and Deli where Rad goes for an Icee shortly after his arrival in Ocean City. There, Anthony himself (Judah Friedlander, of 30 Rock) instructs Rad on Icee pouring etiquette, or lack thereof.

Outside of Anthony’s, Rad meets his new best friend, and fellow vacationer, Teddy Fryy (Myles Massey, a Frederick native) and his new rival, local rich kid Lyle Ace (Joseph McCaughtry, maybe the highlight of the film). Soon he is led to game rooms on the boardwalk where he develops a crush on local girl Stacy Summers (OC resident and Worcester Prep student Emmi Shockley) and finds himself in a high stakes ping pong tournament with Lyle Ace. Fortunately his odd ball next door neighbor Randi Jammer (the ever amusing Susan Sarandon) is an ex-ping pong pro and agrees to train him in the days leading up to the final climactic match.

Ping Pong Summer opened nationwide and on demand June 6th, 2014. Here in Ocean City you can see it at the theater featured in the film- the Fox Sun & Surf 8 Cinema on 143rd street.