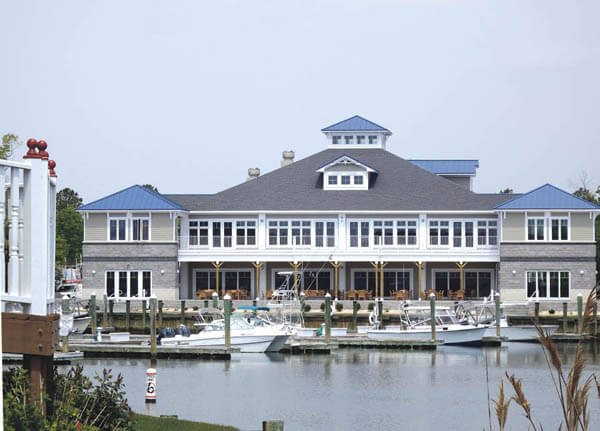 (May 23, 2014) Entertainment is booked for this weekend at the new Ocean Pines Yacht Club, so its doors are expected to open Friday for the first time to the general public.

“We are about to open the doors to a facility the entire community can be proud to show off not only today but for many years go come,” according to the press release about the anticipated opening.

The OPA had obtained a special temporary occupancy permit for a wedding at the Yacht Club on Saturday, May 17, but a few small issues needed to be accomplished before opening for business. Those small items included permanent striping for the parking lot.

“It’s been challenge after challenge as with any major project,” Ocean Pines Manager Bob Thompson said during the May 12 meeting of the Food and Beverage Advisory Committee. “Hang in there with us, folks. We’re getting there.”

Plans called for a practice run for dinner earlier this week for 20 to 30 people who were to be invited to arrive at the same time and order off the menu. The special dinner was being held as a training exercise for the staff and was not open to the general public. The new executive chef, Tim Ulrich, had already cooked for the Worcester County Commissioners and had gotten rave reviews for his food, which was served at the Ocean Pines Country Club during a special meeting with the Ocean Pines board of directors.

The Country Club was also the site of training for the staff of more than 100 for the new Yacht Club.

The press release did not state an opening time, but said the band, “Tranzfusion,’ was booked to perform Friday, “Full Circle” was booked for Saturday and the “Tom Larsen Band’ was scheduled to perform Sunday.

The outside Tiki Bar might or might not be open this weekend. As of Tuesday afternoon, it was still missing its metal roof. A separate county permit for the Tiki Bar was needed and that had been taken care of.

This weekend’s opening of the Yacht Club has not been widely publicized because a “soft opening” is preferred and a crowd is expected anyway.

During that May 12 meeting of the Food and Beverage Advisory Committee, member Steve Lind suggested the installation of signs for people leaving the Yacht Club. Some people, who are new visitors to the Yacht Club, might tend to get confused about how to return to Ocean Parkway, the community’s main street.

“I see them driving around, 10 or 15 cars going in circles,” said Lind, who resides nearby.

Signs pointing to Ocean Parkway could help make their experience more pleasant and their first impressions better than getting lost on their way home, he said.

During that committee meeting, Food and Beverage Manager David McLaughlin said the Yacht Club kitchen would be open 11 a.m. to 10 p.m., but the bar would remain open later.

Committee members were expecting the new facility to be open at 11 a.m. today.

“I can’t wait,” Mary Whitcomb told McLaughlin. “I guess you’ll see us there at 11 o’clock.”