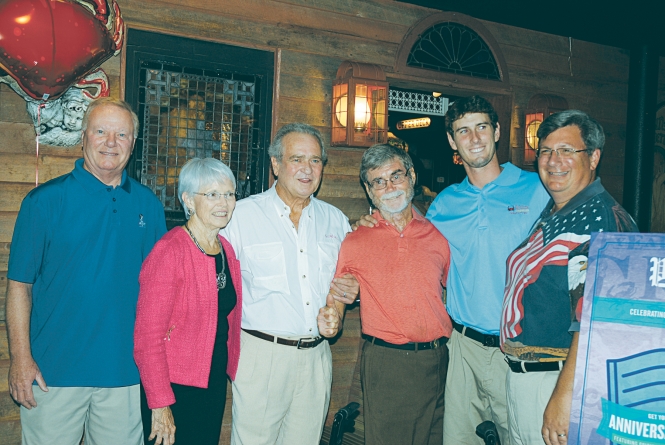 (July 25, 2014) An Ocean City institution is celebrating 100 years of bringing fresh seafood to customers this summer.

But the Phillips brand dates back even further, to A.E. Phillips and Son seafood processing plant that opened on Hooper’s Island in the Chesapeake Bay in 1914.

“I’ve been in the family business since the day I was born,” said Steve Phillips, who grew up working side-by-side with his grandfather processing Chesapeake crabs, oysters and fish. “I’ve got saltwater in my veins.”

The Phillips’ empire grew over the years, reaching Ocean City in 1956 when Phillips’ parents left the island business that could no longer support two families, he said.

The eatery expanded room-by-room to the massive establishment it is today, including a six-dining room seafood buffet upstairs.

In the 1980s the family business stretched into Baltimore and Washington, D.C.

In more recent years, Phillips has opened franchises in airports across the East Coast.

To celebrate its centennial, Phillips Seafood has compiled a 100th Anniversary Cookbook with famous family recipes, from Phillips’ well-known crab cakes to desserts and specialty drinks. Proceeds from the book will benefit the Maryland Watermen’s Association, which sent its President Robert T. Brown last week to express gratitude to Phillips.

“I love the business. I love getting up and going out there in the morning,” Brown said, thanking the Phillips family for “what that have done and how they have promoted seafood.”

Phillips likewise showed thanks to the watermen who keep his business afloat.

“I have a great love for the watermen,” he said. “Our restaurants’ success rests on them going out every day.”

Phillips Seafood also created a new signature drink, the Blue Crab Margarita, to benefit the Watermen’s Association. For each sale, the business will donate $1 to the organization.

The business is hosting a Throwback Thursday event to celebrate its 1914 founding with menu items offered for $19.14 every Thursday this summer. Diners must share a Phillips post on social media and show it to their servers to receive the special deal, which changes each week.

While the Phillips brand has grown from a processing plant in the Chesapeake Bay to eight full-service restaurants in Baltimore, Annapolis and Atlantic City and more than a dozen franchises in airports, casinos and sports stadiums throughout the region, the principal has remained the same, Phillips said.

“It’s just about quality and service,” he said. “The prices change, menus change, but that stays the same.”

And so have customers’ favorite dish — the crab cakes made famous by Shirley Phillips when the family first came to Ocean City in 1956.

Visit www.phillipsseafood.com for more information on Phillips Seafood’s locations, menus and promotions or to order a copy of the 100th Anniversary Cookbook online for $20. The cookbook is also on sale at Phillips locations.

Learn more about the Maryland Watermen’s Association at www.marylandwatermen.com.