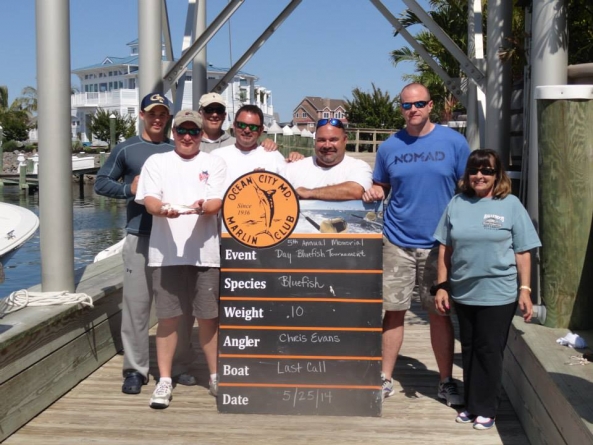 Three boats fished last Saturday, while the rest of the field went out in search of bluefish on Sunday. Four fish were brought to the Sunset Marina scale in West Ocean City.

Chris Evans hooked a .10-pound bluefish aboard the Last Call.

The Sea Hunt crew was awarded $495. Because of participation in more added entry level calcuttas, the Last Call team won $3,735.

“Bluefish fishing was slow. Small fish in the bay, none in the ocean,” said Franky Pettolina, OCMC president and tournament co-director. “We had nice weather and a decent turnout.”

A portion of the entry fee will again be donated to the Catherine & Charles Kratz Memorial Foundation and Scholarship Fund, which provides support, encouragement and a better life for veterans.

Pettolina said about $2,000 will be presented to the foundation.