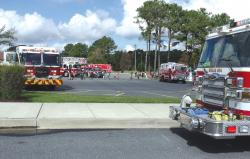 Students at Ocean City Elementary School walk back to class Wednesday morning after evacuating because of an odor of smoke.OCEAN CITY TODAY/NANCY POWELL(Oct. 12, 2012) Pupils at Ocean City Elementary School were expecting a demonstration Wednesday about fire prevention and fire safety. Instead, they evacuated the building because of the odor of smoke.

Some firefighters were already at the West Ocean City school because of the scheduled demonstration to be done in conjunction with Fire Prevention Week. The “smoke trailer” was parked at the site so it could be used to teach the children how to escape from a building in case of fire.

Shortly after 11 a.m., the odor of smoke was noticed in the kitchen area of the school. Soon afterwards, several fire trucks of the Ocean City Volunteer Fire Company arrived so firefighters could search for the cause of the smoke.

It turned out to be a failed motor in a ceiling HVAC unit, which was was shut down and removed from the building, school officials said.

While firefighters were inside the school, the students calmly sat or stood with their classmates and teachers outside. After it was announced that they could return to their classes, they walked single-file back into the school.

“It shows you how well our teachers and support staff enable our kids to do a phenomenal job,” Principal Irene Kordick said as she watched the students return to their classrooms. “Today, we evacuated kindergartens during lunch and there was no problem. It was perfect. We never know when it’s going to be the real thing.”