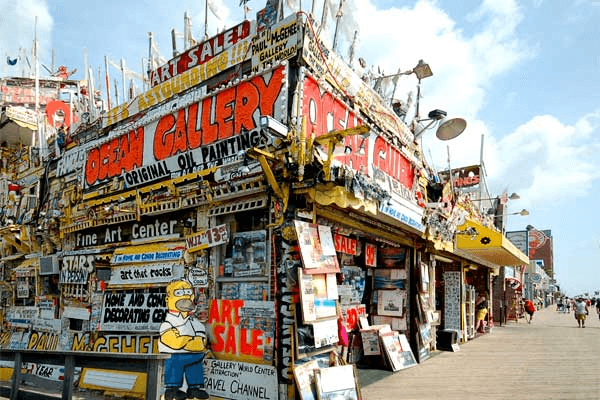 (Aug. 1, 2014) If you happen to hear in the next few months that Boardwalk landmark Ocean Gallery will, after 50 years of business, be picking up and moving to Los Angeles, the rumor is completely true – as far as you know.

Never a stranger to the art of the shtick, Ocean Gallery owner Joe Kroart has embarked on a campaign to let people know that he fully intends to move his business on Second Street, including the building itself, to California.

“It’s a calculated business risk, but also an extraordinary adventure,” Kroart said. “I consider it the opportunity of a lifetime.”

For years, Kroart has been involved in pitching his iconic and eccentric gallery for film and television productions, with considerable success. But the ultimate prize – a reality show about the business –has so far eluded him, until now.

“We’re basically just waiting to get the contract back,” Kroart said, from a production company that has been involved with a number of genre reality shows based on certain professions or businesses.

“I’m in it enough now to take the risk of putting this out there,”Kroart said. “It’s a risk because I’ve grown this business, but if you put something in front of people and it doesn’t work out, you can get a lot of negative out of it.”

The premise of the show would be the relocation of Kroart’s business to Hollywood, including the dismantling of the historic building itself and its reconstruction in California. But the show’s fodder would not be the actual move, but rather the idea of moving and the responses generated from the business’ owner, employees, and long-time customers.

“This action is going to generate strong emotional responses from thousands of people all over the world,” Kroart said. “This place has been a part of people’s lives for a long time. You start to disrupt that, or even make the suggestion that things are going to change or come to an end, and you’re going to get a tremendous outpouring, which is the fuel for reality TV.”

This means that Kroart does, in fact, fully intend to go forward with the relocation. Whether it actually happens or not is immaterial.

“Where would they even put it? I don’t know, but what does it matter – the point is that we could do it,” he said. “If we get the contract, it’ll go. That’s as honest as I can be with people. But the controversy could stop it from happening.”

Given that he owns the land and building on the Boardwalk and the north side of Second Street, Kroart could relocate, although it would be a massive undertaking.

“It might turn out a lot of different ways, because I don’t control Hollywood,” Kroart said. “But I do control the building and the property, and if they want to roll it out of here, they can do it. I’m perceived as being crazy enough that that could happen.”

In fact, Kroart first discovered the publicity power of real estate foibles decades ago, when the construction of the Park Place Hotel resulted in demolition of the older buildings to Ocean Gallery’s north. The business was never in danger, but that didn’t stop Kroart from drawing a large number of visitors who believed it was.

“When it was all over, we ran ads saying ‘building saved from urban sprawl.’ It was great,” Kroart said.

Neither is he a stranger to the TV and movie industry. Ocean Gallery was featured in the recently-released Ping Pong Summer, and will be making a foray into foreign cinema when the Russian film, “Turbo” is released next year.

The heroine of that film, shot partially in Ocean City, will be seen driving off in Kroart’s “Batmobile” – a car which cost him $28 in spray paint and scrap electronics to create – at the end of the movie.

Even if the reality show does not pan out as swimmingly, Kroart still plans to go through with the premise, and shoot it himself for his own promotional material.

“We’re going to do it either way,” he said. “The attention is on the process itself. It’s a combination of fantasy and reality. That’s the mix that entertainment is all about.”