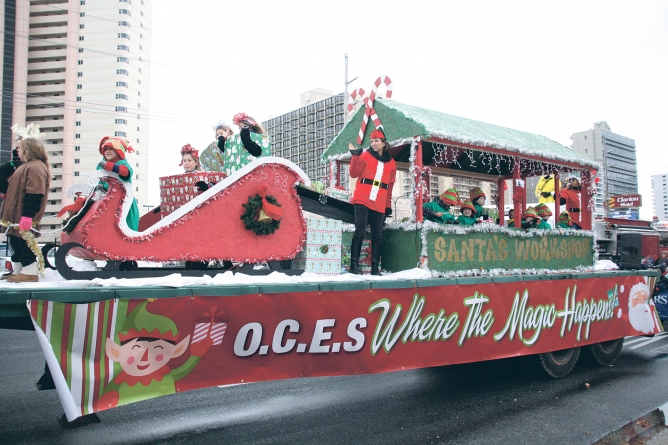 The holiday parade will start on 100th Street and continue north in the southbound lanes to the Gold Coast Mall on 115th Street. There will be 80 units featured this year, including high school bands, horses, llamas, antique cars and holiday floats.

“There’s people who have been coming down to see the parade for a long time and only visit Ocean City in the wintertime for the parade and Winterfest of Lights,” said Elaine Jarvis, Gold Coast Mall manager. “It is a nice way to start off the holiday season.”

Trophies will be awarded inside the mall following the parade for first, second and third place in each category.

The parade will last approximately two hours and seating will be located in the Gold Coast Mall’s parking lot for spectators. About 1,000 people participate in the parade annually and 3,000 spectators are expected to be at the event this year, lining Coastal Highway to watch the procession.

Santa Claus will be inside the Gold Coast Mall after the parade. In addition, Puppet Man, Jim Stark, will entertain the crowd while the judges deliberate. Stark will perform a few shows and walk around outside. All the mall stores will be open. Many merchants will offer holiday specials and a couple will have 50 percent off the entire store, Jarvis said.

The parade will feature three local high school bands—Snow Hill, Pocomoke and Stephen Decatur. Chesapeake Martial Arts and Renegades Marching Corp out of Mercersburg, Penn. are two new additions to the parade lineup this year. They will join Trimper’s Rides and Harrison Group’s commercial floats who have participated since the parade’s inception.

Traffic pattern changes will begin around 9 a.m. on Saturday.

There is no fee to participate in the parade. To enter the parade, which is sponsored by the Gold Coast Mall Merchants Association, call Jarvis at 410-524-9000. 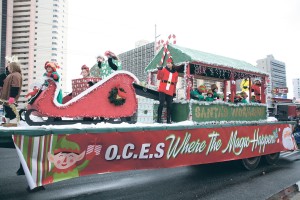 Children dress as elves and presents on Ocean City