Taking a walk along the Ocean City Boardwalk

The Ocean City Boardwalk is arguably like no other place on Earth. Sure, there are other boardwalks lining the shores of coastal cities around the world, but somehow, OC is just a little bit different – maybe it’s something in our sector of the Atlantic Ocean water. 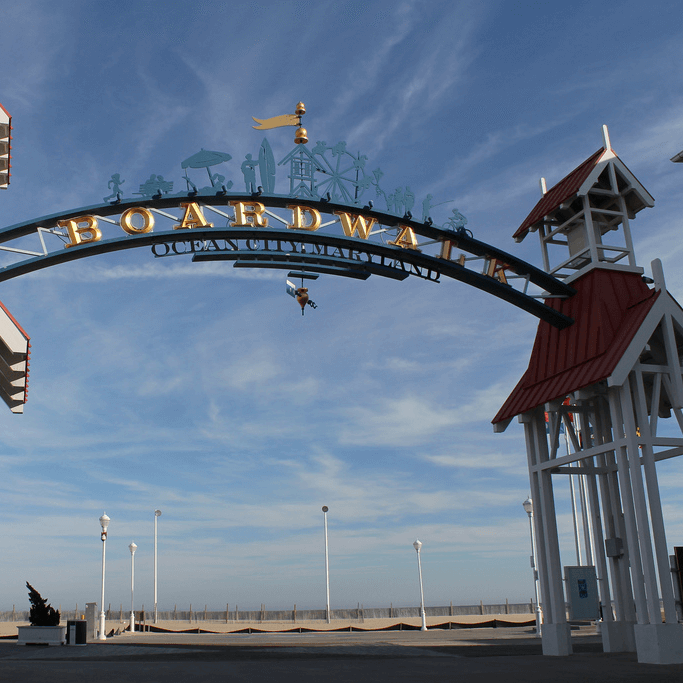 The Ocean City Boardwalk dates back to 1902 when several hoteliers decided they and their guests needed a way to walk easily between their places of business while enjoying the view of the ocean. The result was a wooden walkway that was removed at high tide and stored on the hotel porches. In 1910, a more permanent boardwalk was created for the visitors and residents of Ocean City. It originally ran five blocks, but was extended to 15th Street the following decade. When the boardwalk was destroyed in the great storm of 1962, it was rebuilt to its current length, running from the inlet through 27th St., ending just before the Dunes Manor Hotel. In 2012, the Ocean City Boardwalk underwent a complete renovation whereby the old splintering and rotten boards were replaced with new wood, while retaining the old-fashioned feel of it’s historic past.

And now, an abridged guide

With so much to do on the three miles that the boardwalk spans, it can be a little overwhelming to plan a short day trip, let alone an entire beach vacation. Getting the most out of the boardwalk means experiencing the points of interest that are totally unique to Ocean City, as well as enjoying the typical boardwalk fare. And keep your eyes peeled, because what may seem run-of-the-mill at first – a paint-peeled haunted house, an old carousel – could turn out to have a magical history that you’d never expect.

There are, of course, the obligatory buskers making balloon animals and spray-painted beach scenes, but the Ocean City Boardwalk also boasts artistic sites that often make tourists do a double-take.

The Ocean Gallery on 2nd street, for example, is a landmark of the boardwalk in part because it’s so weird. Where else can you find a gallery that looks like it has more art displayed on its exterior than on the inside? The Ocean Gallery has been around for over 50 years, and if you visit on the right day, you might even see the decked-out Batmobile parked at the side of the building.

Ocean City Boardwalk is special for lots of reasons. It’s a place people have nostalgia for, it’s a place kids look forward to visiting, and associate with summer and, for many of us, it was the place where we spent out late teenage years, playing at being grownups on vacation.

At any time of the year, walking on the boardwalk alongside the beach, Jesus sand sculptures are another ever-present OC boardwalk staple. Whatever your denomination or creed, it’s impossible not to be awed by the intricate carvings in the sand, created and maintained by local artist Randy Hofman. 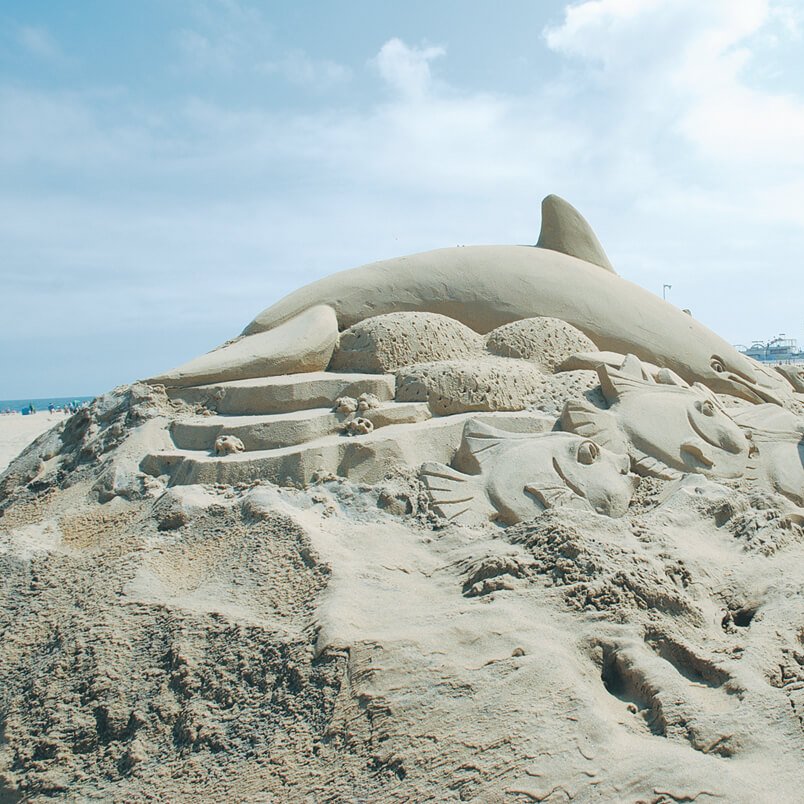 The old wooden castle and ship structures that kids used to play on have been replaced. Now, just in case the sun n’ surf doesn’t cut it for youth entertainment, kids can climb on a literally-beached whale structure, dino bones lodged into the sand and a new playground on North Division Street.

No, the Ocean City Boardwalk Doesn’t Close – What Is Open in Ocean City

We get lots of people asking whether the Boardwalk closes. The answer is no, not ever. The Ocean City Boardwalk is essentially just like a street it always is there to be walked upon and generally enjoyed. Although that hasn’t always been the case.

A museum that could save your life

Not really, but…maybe. The Ocean City Life-Saving Station Museum is dedicated to the preservation, education and research regarding the Maryland coast and takes visitors on a journey back in time to a historic rescue mission carried out by the Surfmen of the US Life-Saving Service. The museum offers an interactive kids corner and slices of Ocean City history, including a decades-old, possibly haunted doll called Laughing Sal who once guarded the entrance of the boardwalk’s now-defunct Jester’s Funhouse.

The Trimper’s Haunted House at the south end of the Boardwalk is as iconic as the teeth-barring bat that adorns the ride’s second story. For over five decades, kids and adults alike have fallen in love with the Ocean City Haunted House (OCHH)’s neon-painted walls, kitschy stunts and decapitated Count Wolf Von Vinderstein who guards the ride’s entry.

Even the sights and sounds that you’d find in any other tourist destination have just a little more sparkle in Ocean City. For example, the haunted house on Atlantic Avenue at first appears to be another Trimper’s amusement, and it is a Trimper’s ride – but it’s technically called a “dark ride,” and was built in 1964 by Bill Tracy, a legendary designer in the world of dark rides. Today, his haunted house in Ocean City combines original tricks and scares of the 60s with newer, modern fixtures like zombified corpses and other jump-scare monsters.

The boardwalk is home to all kinds of rides old and new, with Jolly Roger’s amusements on one side and Trimper’s on the other. While the Jolly Roger’s rides are relatively modern, some of Trimpers’ have been delighting families for over 100 years. The giant indoor carousel was purchased by Daniel Trimper in 1912, when rides cost only a nickel, and is the last of its kind after its twin merry-go-round in Coney Island was destroyed in a fire. Other rides with ornately gilded decoration and hand-carved, wooden fixtures like the 1920s kiddie carousel and kiddie ferris wheel are also still in commission.

Obviously every tourist destination offers a variety of salty and sweet treats, but some cravings can only be satisfied in OC. Thrasher’s fries have been best served doused in vinegar since 1929, and Dolle’s Candyland is still operated by the Dolle family after four generations. Dumser’s ice cream and Fisher’s popcorn are just two other sweet traditions with origins on the Ocean City boardwalk, and Boog’s Barbecue came all the way from Camden Yards to bring world famous pit beef to families on their beach vacations.

Walking the boardwalk for exercise – OceanCity.com

A little insider’s tip: The boardwalk is one of the best places to go for a run, even in the summer. So is the beach. Going on vacation doesn’t have to mean losing sight of your health and fitness goals, and if you’re willing to put in a little bit of time and energy, you …

From the locals to the tourists, every person walking the Ocean City Boardwalk during the summer seems to be a character. Buskers spray paint themselves golden and mutely mimic bike riding to an audience of children and adults alike, or brave the sweltering heat in Disney costumes to pose for pictures with kids. For hundreds of years, friends have been made and families have grown closer on the three-mile span of the Ocean City Boardwalk, and more than anything else, those memories are Exclusively Ocean City.