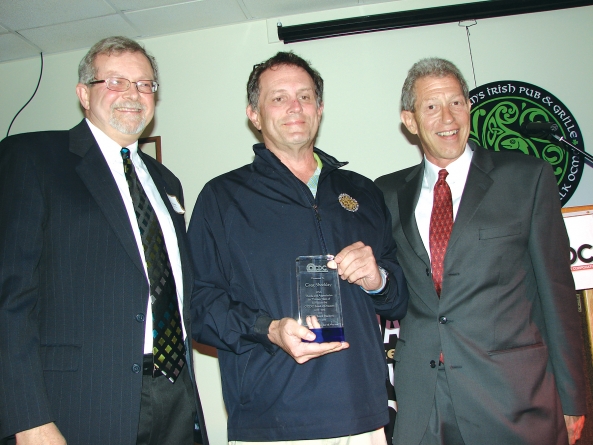 (May 10, 2013) The Ocean City Development Corporation held its annual meeting last Wednesday night at Shenanigan’s Irish Pub & Grille on the Boardwalk, entertaining a packed crowd of public officials and business leaders while recognizing its most important contributors and success stories.

“Without your help and continued support, we would not survive,” said OCDC President Bob Givarz.

OCDC is a non-profit organization, funded via public grants and private fundraising, that finances urban redevelopment in downtown Ocean City. The organization offers several programs, most notably its façade improvement initiative, which provides partial funding for property owners to renovate the exteriors of aging buildings and improve their streetscapes.

To date, Givarz said, OCDC has financed 138 façade projects, with another eight under way, representing more than $4.7 million dollars of public and private investment.

An award for OCDC’s Green Buildings program, which subsidizes energy-efficient renovations, was given to Walter and Susan Madigosky at 102 South Philadelphia Avenue.

Individual awards were given to Town of Ocean City Public Works Director Hal Adkins, for his assistance with a number of public projects, as well as to former OCDC President and outgoing board of directors member Greg Shockley.

“When I first started, there were all these guys who had kept the town running for so long, and it was an opportunity to learn from them,” Shockley said. “There were so many great people on that board, and there still are.”

City Manager David Recor, who began his career in Ocean City less than a year ago, and Planning and Community Development Director Matt Margotta, who started in January, spoke on their first impressions of the resort.

“When I came here,” Margotta remarked, “I found a lot of knowledge on the public and private side. The private side is what really surprised me, and another thing that makes Ocean City unique. That level of experience and interest isn’t common other places.”