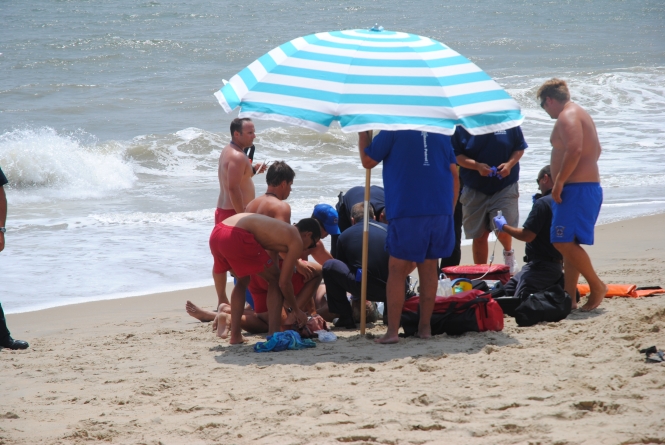 (June 27, 2014) Emergency responders rushed a Timonium man off of the beach at 82nd Street around noon Wednesday after a bodysurfing incident left him face down in the water, Ocean City Beach Patrol Capt. Butch Arbin said.

They could not find a pulse after they pulled him to shore and treated him with five rounds of CPR before he began coughing up water, rescuing lifeguard Robert Phiambolis said.

His heartbeat returned by the time medical staff carried him from the beach on a bodyboard to be medevaced from the scene, he said.

“I was just finishing my scan up to the north and saw him lying face first” in the surf about 10 yards from shore, Phiambolis said.

When he rushed to the water, several beachgoers joined in the rescue.

“I saw the lifeguard drop everything and run and I saw a body in the water,” said Derek Perdue, of Parsonsburg.

“He was face down. The guy wasn’t breathing,” said John Hughes, of Pittsburgh, Pa.

Based on the victim’s bleeding nose and forehead, beach patrol staff treated him for neck injuries, Arbin said.

“Whether he has a bloody nose or a broken neck… we treat him the same and let the hospitals diagnose him,” he said.

Phiambolis used a practiced beach patrol technique where the rescuer uses his own body as a backboard to swim the victim to shore, immobilizing the head and neck as much as possible.

Though the surf wasn’t rough and the victim’s wife said he body surfs often, it is likely he hit his head on the shallow bottom, Arbin said.

“The guy’s fine one minute and suddenly he’s motionless in the surf,” he said. “You catch one great wave and the next thing you know, your feet are over your head.”

After the victim was carried off the beach and bystanders dispersed, the beach patrol’s priority was to comfort his wife and help direct her to the hospital, he said.

Beach patrol veteran Bill Wise was on the beach during the rescue and called Phiambolis’ actions a “textbook” case.

“I thought he was dead when we pulled him out of the water,” Perdue said. “I’m glad they were able to revive him.”

The victim’s name and condition were unknown at press time.