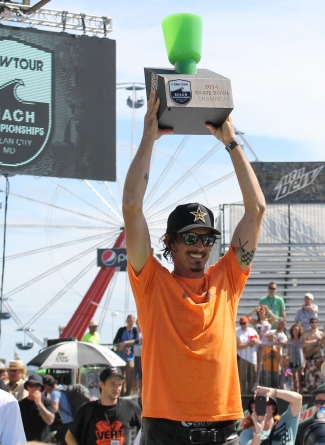 (July 4, 2014) Athletes from all over the world, ranging in age from young teens to 40-plus, converged in downtown Ocean City, June 25-29, for the Dew Tour Beach Championships. Competitions were nothing short of action-packed.

“All of the events were exciting. The athletes were at the top of their game,” said Ocean City Mayor Rick Meehan. “They’re some of the finest young athletes in the world.”

“I am always amazed by the talents of the athletes. As if the actual structure of the Dew Tour isn’t impressive enough, it almost takes your breath away to watch the athletes–some of whom are so young–do outstanding tricks and flips. It’s truly remarkable.”

Added Eric Grilly, president of Alli Sports, “This year saw some very exciting finals. Sunday was especially exhilarating, as Bucky Lasek took home the Skate Bowl Dew Cup in his hometown and Jamie Bestwick earned his 10th consecutive Dew Cup. Many of the athletes also commented on the positive energy coming out of the crowd throughout semifinal and final events.”

The first competition of the weekend took place Thursday evening in the ocean near the pier.

The second annual Surf Shop Showdown presented by Sanuk showcased the top local surfers representing area surf shops. The event consisted of two sessions with four surfers in each. Surfers had a nine-minute heat to get as many waves as they could.

The top two surfers–Matt Meinhardt, representing Chauncey’s Surf Shop, and Tyler Clazey of K-Coast Surf Shop–advanced to the final round for 17-minute heats.

“I was nervous before every heat, but especially after [the final] heat because I didn’t get a lot of good waves,” Meinhardt stated in a press release. “It’s awesome…It was cool to get the pros to come and do it, but it’s even better to do it with the local boys here–especially the [up-and-comers]…All my homies are here, it doesn’t get any better than this.”

The second annual Skate Street Session took place in the middle of the Dew Tour Experience last Friday. Eight top street skaters displayed their best tricks in a 30-minute jam session on the course with a nine-stair set, a handrail and hubbas. Kelvin Hoefler, who took second in the event last year, nailed the most technical tricks during the 2014 competition. His tricks included a 360 flip flipslide, front blunt on the hubba ledge, nollie front blunt on the rail and a switch backside lipslide.

He won the overall and best trick awards.

“This city is so good. I probably skated so well because this is like my hometown [being on the beach], so I came in confident to skate,” Hoefler stated in a press release.

The top 10 riders from Friday’s semifinal competed on Saturday in two heats. For the first heat, five riders took two runs, then, the five riders in the second heat took two runs. All 10 athletes then took a third and final run. The were judged on overall impression with their best run counting toward their overall score.

Defending BMX Park champion, Ryan Nyquist of Santa Cruz, Ca., scored a 91 in his first run and led throughout the contest.

“My first run was pretty awesome. I was really happy after that one,” he said.

He increased his lead in the third round, earning a 91.25. It all came down to the final run, where Andy Buckworth of Lake Haven, Australia, edged out the leader, scoring a 91.75.

“Ryan’s (final) run was insane. He had all sorts of technical lines, huge jumping tricks in them,” Buckworth said. “There was no way I was beating him without giving it absolutely everything. I would not have been happy with myself if I gave it half an effort…”

After his run, he threw the first-ever double flair attempt at a BMX Park event to cheers from the crowd. Although he was unable to land it, his final run put him in the top spot to win the Dew Cup.

Buckworth said he was speechless when it was announced he won the competition.

“Just being out on the park course with Ryan Nyquist is an honor…I still respect him as a legend to this day and I think I always will,” Buckworth said. “This is huge for me. BMX from the beginning has been about self accomplishment and seeing how far I can push myself with the sport, with the tricks…I feel so accomplished right now that I can stand on top of the podium…”

“You go out there and lay it all on the line and you’ve just got to be happy, and I am. I’m happy with my run,” Nyquist said. “[Andy’s run] was incredible. A no-handed double flip and then double flip over a spine, it was just craziness.”

The BMX Street Session got under way after the BMX Park finals on the same course as the Skate Street Session. Ten riders battled in a 30-minute jam session. Dan Lacey’s 360 over the rail to ice pick earned him the Best Trick award for the second consecutive year.

Stevie Churchill won the event with tricks including suicide no-hander, truckdriver and 180 barspin over the rail.

“I was tight. I can’t believe it,” Churchill stated in a press release. “I didn’t expect to come out and come up on first. It was such a cool session…”

Maryland native Bucky Lasek, last year’s Skate Vert champion, struggled to complete a run and failed to advance to the “Super Final” much to his disappointment as well as his fans’.

“It’s a big disappointment, because I know what I have…,” said Lasek, who has been struggling with injuries this year. “I’m competing in vert and bowl…making the finals in both. I didn’t have the energy in vert. I don’t want to say I gave up, but I was just kind of hoping luck would bring me into the super finals, but it didn’t happen for me.”

Canadian Pierre-Luc Gagnon led after three runs with a 90.25. He secured a victory with a 94 in his fourth and final run which included a grapefruit grind, a front side air and a nollie bigspin heelflip at the buzzer.

He said it felt “pretty awesome” to land atop the podium after a tough year battling injury and he was pleasantly surprised to score a 94 in his last run.

“I’m still not 100 percent and I was a little worried, especially with three different jams–semifinals, finals, super finals. It’s a lot of skating and I hoped my body [would] make it through the event,” he said.

The win put “PLG” in the lead with most Skate Vert Dew Cups (five) in the Tour’s 10-year history.

The Skate Bowl finals kicked off the last day of Dew Tour action. The concrete bowl was redesigned this year with new hips, more walls in the deep end and the addition of a clam shell feature.

The 10 skaters who advanced to the finals competed in two heats, with five riders in each. The top two scores for each skater were averaged and the five with the highest marks advanced to the “Super Final.”

Instead of needing one big score to win this year, the athletes had to put out two good runs. The two best scores were averaged to decide the winner this year.

After a disappointing Skate Vert showing, Lasek was determined to step up his game. The night before, Lasek, who grew up skating in Ocean City, said he played runs, tricks and combinations through his mind.

“I had a hard time sleeping last night. A lot of thoughts in my head. I put a lot of stuff together in my head,” he said. “I think I was able to gather the energy and put it together in the finals.”

Lasek tricks included stalefish into the clam shell, McTwist in the deep end, frontside rodeo 540, heel flip indy and a backside tail slide on the hip from the shallow to deep end, which earned him the Skate Bowl title.

“There’s nothing better than coming to compete in your home town and taking a win or a victory or doing well, but if I would have walked away with nothing, there’s nothing more disappointing than letting your fans down and disappointing your fans and having them come up to you and being sad for you. It’s not a good feeling,” Lasek said. “I want everyone to be happy, win or lose, and that’s not the case. It’s great to have such fans behind you, but if you don’t do good it effects your energy and I want to send out positive energy so I like to do the best I can.”

“I had a lot of pressure to come out here and do good for the fans,” he continued. “Win or lose, I know they’re behind me, but I know they want me to do good. It feels great.”

The announcers joked that three of the skaters in the finals, Schaar, Juneau and 16-year-old Alex Sorgente’s ages totaled 45, noting Lasek’s age of 41.

“It’s only a matter of time. I can only hold those guys off for so long,” Lasek said. “They’re learning so fast. They have so much power now.”

Lasek still has stuff left in the tank and said this won’t be his last Dew Tour.

“I’m still very competitive and disappointed in my performance in vert. I want to come back and still battle for a win at 42,” he said.

The last competition of the Dew Tour Beach Championships was the BMX Vert. Jamie Bestwick of Nottingham, Great Britain was going for his 10th consecutive Dew Cup.

Ten of the top BMX riders took three runs, and it was Bestwick who again came out on top.

He wasn’t pleased with his first run, but has family and friends in attendance assured him.

Bestwick’s second run, which included his signature alley-lop 540, a downside whip, flair tail whip and dialed front flip flair, earned him a 90.75 and he led going into the third and final run.

Since no one was able to score higher, Bestwick’s third run was his victory run.

“I really didn’t think tonight, especially after that first run…I thought it was going to be one of those nights when it didn’t go my way,” he said. “Nine cups in a row, you got to have an off night, but a lot of experience was brought into that second run. I made sure I was super focused. I went when I felt calm and I pulled off some great tricks.”

Vince Byron if Brisbane, Australia took second with a 90. Simon Tabron of Liverpool, Great Britain finished in third place with an 86.

“This caps off probably one of the best years of my life,” he said. “It’s an anniversary year. It’s kind of like a vintage wine. When you open it up, it’s a thing of beauty. It’s a proud moment for me to come here and be 10-for-10…I want to see the young guys do bigger and better things without the pressure that I put these guys under. For me, to see the new generation, of course I invite the streak to be broken, but they have to understand, when they call my name out, I’m gonna ride, so there’s a good chance I’m going to keep the streak alive.”