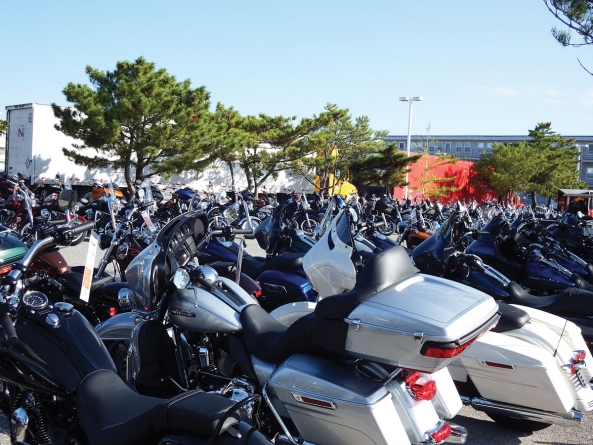 (Sept. 19, 2014) Tens of thousands of motorcyclists came, rode, spent money, listened to rock music and partied Sept. 11-14, but there were no serious collisions and only 30 people, including some motorcyclists, were arrested by Ocean City police.

“We saw a handful of motorcycle collisions but fortunately no life-threatening injuries were reported,” said Lindsay O’Neal, public affairs specialist for the Ocean City Police Department.

The biker arrested for having a weapon was Theodore J. Savage, 29, of Frederica, Del.

An Ocean City police officer stopped Savage at Talbot Street and Baltimore Avenue at about 10 p.m. Friday because his motorcycle’s registration plate was displayed vertically instead of horizontally. After stopping Savage, the officer saw that the tread of the motorcycle’s rear tire had worn off. The tire was “completely bald,” according to the charging document.

The officer discovered that Savage’s license was suspended in Delaware and arrested him for driving on a suspended license.

In response to a question about weapons, Savage said he had a pocket knife and a metal lock tied to a bandana to keep it from blowing out of his pocket.

In the charging document, the officer described seeing “an incredibly large metal lock tied to the end of a bandana,” which the officer wrote was a weapon.

“A bandana with a lock tied to the end is a common improvised impact weapon,” the officer wrote.

He also wrote that Savage again said he used the metal lock to keep the bandana from flying out of his pocket and he also used it to lock his motorcycle.

Savage was charged with having a concealed deadly weapon and he was also charged with nine traffic offenses, including driving an unregistered motorcycle, driving an unsafe vehicle on a highway and failure to equip the motorcycle with two rear view mirrors.

The other person arrested for having a weapon was a man who had a replica BB gun and his wife’s stun gun in his car.

O’Neal said the police wanted to thank other law enforcement agencies for assisting during the events that brought bikers to the area.

“We would like to thank and commend everyone that was involved with the event from law enforcement to event staff, local business owners and, of course, OC BikeFest participants for another safe and successful event weekend. We look forward to welcoming everyone again in 2015,” she said.