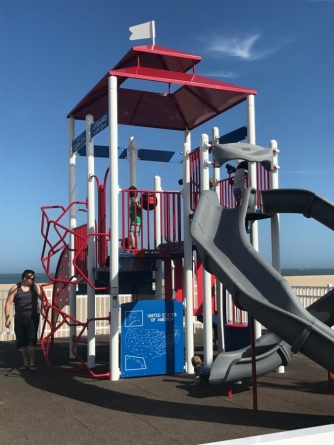 The Ocean City beach playground is just the latest in a long tradition of free things to do in Ocean City.

After months of anticipation Ocean City officially opened its first playground on the Boardwalk this week  with the snip of a ribbon in spring of 2017.

The playground, which features three slides, monkey bars, a small  ice cream stand and a map of the United States, sits on the concrete slab near the boards on North Division Street and behind the backdrop of the water. Ocean City has been planning for months to put the playground on the boards, with  assistance of the Maryland Department of Natural Resources.  It was open for business on Monday.

“The Town is very grateful to the Department of Natural Resources for recognizing the value of a playground along Ocean City’s amazing Boardwalk and for providing the funding to assure its construction,” Ocean City Recreation and Parks Director Susan Petito said. “This project would not have been possible without the input and cooperation from many of the Town’s Departments, and we are all so pleased to be able to offer another fun recreational amenity in Ocean City for our residents and visitors.”

Many Ocean City staff members like engineer Terry McGean, Public Works Deputy Director Jon Van Fossen and Parks Superintendent Calvin Ginnavann  joined forces on this project. Construction started over the winter and final touches were put on in March, but is the culmination of nearly a year and a half of planning. Petito first proposed using a state grant to purchase a playground to be placed near the beach  in August 2015.

In the past few years, the Recreation and Parks Department had explored several avenues to replace the  wooden beach toys on the beach that were getting old, outdated and vaguely cracked. 2014 was the first year that saw new playground equipment being placed on the beach with “Dino” the dinosaur bones near Third Street. These were made of a concrete mixture.

The next year, the city bought Wally the Whale, a  fiberglass structure of a whale head and tale peaking up above the sand. The general idea is that the whale could entice kids climb on it while teenagers or adults could be inspired to take their pictures with it. Wally the Whale was installed last May on the beach near Somerset Street.

To celebrate the play structure becoming officially open for play, Ocean City held a ribbon cutting on Monday afternoon, with dozens of city officials and parents and kids in attendance. Led by Mayor Rick Meehan, the ribbon was cut by a half-dozen kids. Quickly afterwards, the kids scampered up the play structure to use the slides and monkey bars.

Parents are going to have a hard time getting their kids off of this playground if the opening day festivities were any indication. The kids in attendance kept sliding down, climbing up and scooping pretend ice cream  as the sun sunk across the horizon. Sometimes, families walking by stopped to play with their kids on this latest addition to the family-friendly resort.

Boardwalk Birdie has flown all over, but there's no place she likes better than Ocean City. Some of her favorite spots include Assateague Island, the benches on the boards near Third Street, and Decatur Diner. She loves hearing titterings and tweets from readers, so drop her a line at boardwalkbirdie@gmail.com