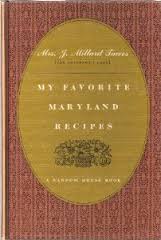 I purchased my copy of “My Favorite Maryland Recipes” when I was in my first year of college, in a secondhand book shop, and ever since it has remained my “go to” reference book on classic Eastern Shore cuisine.  It is filled with authentic recipes brought together by Helen Avalynne Tawes.  Avalynne may not be a well known name to most Marylanders anymore so allow me to give you a bit of background on our author.

Helen Avalynne Gibson was born in Crisfield, Md on October 9, 1898.  She studied music at the Peabody Institute in Baltimore, Md and learned to cook, like all girls of that age, by watching her mother.  At the age of sixteen she met J. Millard Tawes, who was twenty years old, on a hayride and one year later they were secretly married on Christmas Day 1915.  J. Millard Tawes began his political carrier and in 1958 he became the 54th Governor of Maryland and held the office for 8 years at which time Avalynne became “The Governor’s Lady”.  Once married, she realized that her new mother-in-law was also a wonderful cook and began learning from her as well as her own mother.  Avalynne was born, raised, educated, married and raised a family of her own on the Eastern Shore of Maryland which in this day and age is more of an anomaly rather than the norm. But this made Mrs. Tawes uniquely qualified to write a cookbook and gave her the clout to have it published.

Over the next few weeks I will be sharing excerpts and recipes from her cookbook, published in 1965,  in the hopes of bringing a renewed knowledge and pride to our Eastern Shore cuisine, local food products and Mrs. J. Millard Tawes.

The introduction begins with a show of pride in Avalynne’s State and Region:

“Dr. William H. Wroten, a history professor at Salisbury Teachers College, had this to say about the Eastern Shore of Maryland: “It’s been said that the Lord made the earth in six days and rested on Sunday. On the eighth day, He made the Eastern Shore.”

Naturally Mrs. Tawes agrees whole-heartedly and then she goes on to wax poetic on the greatness of Maryland.

“It is history that people in Maryland have always lived well.  That has been a sort of blessing that came, built-in, with our land.  As early as 1608, Captain John Smith, the explorer, commented that “if Providence were designed an ideal place for men, it would produce the Chesapeake Bay country.” Later, in 1666, one of Lord Baltimore’s colonists, writing home to encourage other people to emigrate, exclaimed, “They need not look for any other terrestrial paradise.”

“These people had no patriotic pride. They were newcomers, open-mindedly looking things over-that is how they felt.  Today, we Marylanders certainly do not claim that we live in “paradise,” but we are aware that we have inherited some traditions that make our lives distinctively agreeable.  One of these is our food.”

The first recipes I will share are classic preparations of very traditional dishes of our area.  The interesting aspects of these recipes are the usage of local products, which we think of as a “new” concept but which in actuality is the way everyone used to shop and cook before the advent of “Super Markets.”  I also love the techniques of the time so read, cook and enjoy. 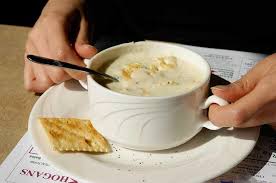 Remove all the shell from crab meat.  In a double boiler melt butter, add milk, parsley, celery, salt and pepper, Tabasco and crab meat.  Heat for about 15 minutes, but do not allow mixture to come to a boil.  Mix flour with a little cold water to make a paste.  Add to the hot mixture and stir until a little thick, then add cream and stir well.  Allow the entire mixture to simmer over the double boiler for 20 minutes, do not boil.  Stir occasionally and be sure to keep water in the lower part of the double boiler.  Serve in bowls with saltines or Maryland beaten biscuits.

Pinch of baking soda size of a pea (no larger)

Work all ingredients together well, have dough stiff.  Beat 20 minutes with iron mallet.  To shape biscuits, squeeze dough through hole made by thumb and forefinger, pinch off and pat down a little.  Place on baking sheet and prick 3 times with fork.  Bake in oven at 400 degrees for about 25 minutes. 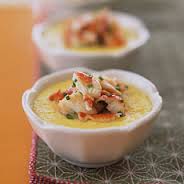 1 one pound can crab meat

To crab meat, add eggs, milk, mustard and salt and pepper to taste.  Place in buttered casserole and top with bits of butter.  Bake in 325 degree oven about 20 minutes, or until set. Garnish with fresh lump crab meat.

The Hardcore Foodie has been in and around the restaurant business for over 40 years. Starting out as a busboy during his teen years he attended Johnson and Wales and graduated with a degree in Hospitality/Hotel/Restaurant Management. Following graduation he worked for Sheraton, Hilton and Marriott properties on the east coast. Later in his career he managed well known, high end, freestanding Italian and French restaurants in Washington DC, Atlanta Ga., Scottsdale Az. and San Diego Ca. Upon returning to DC he worked for Marriott Food Services as GM of both the House of Representatives and Senate Capitol Building operations for 5 years. The Hardcore Foodie has lived in Ocean City, Md. for 12 years but still keeps active in the food industry through consulting, writing and constant research.