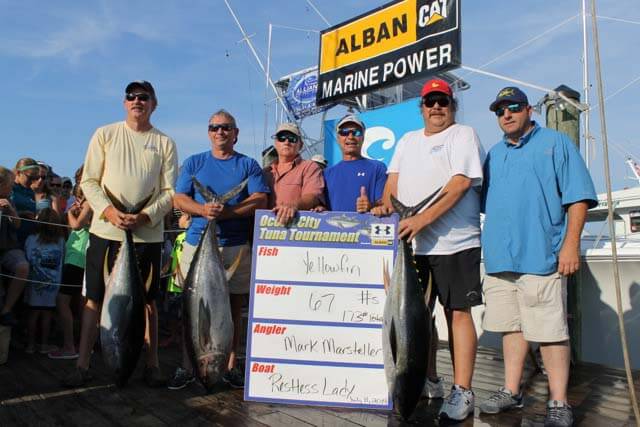 (July 18, 2014) The final day of the 2014 Ocean City Tuna Tournament proved to be exciting as there were some changes in the leader board in each of the competition’s divisions.

“Despite a slow start Friday and pretty much Saturday, we saw a lot of fish on Sunday. And we saw some dolphin finally,” said Tournament Director, Jennifer Blunt.

A combination of poor weather and the super moon may have been contributing factors to slow fishing July 11-12, the first two days of the three-day tournament. Teams were eligible to fish two of the three days. Most of the tuna activity was around the Washington Canyon, Blunt said.

The Espadon crew brought John Hughes’ big eye to the Ocean City Fishing Center scale in West Ocean City, on Saturday. The fish weighed 249 pounds to take first place in the tournament. The big eye was worth $273,715.

A majority of that money, $189,000, came from the Level F Pro Tuna Jackpot, which is a winner-take-all pool for the largest single tuna. It costs $5,000 to enter and 41 of the 80 tournament boats registered for the Level F calcutta.

Clint Senior landed a 183-pound big eye on Sunday aboard Game Over, good for second place in the Single Largest Tuna Division. The crew won $42,000. Jeremy Gers’ 165-pound big eye he landed Sunday while fishing on MJs, put him and his teammates in third place. They were awarded $24,805.

The Marli and Restless Lady crews tied for first place in the Heaviest Stringer Weight Division with a 311-pound total catch weight over two days. Each team received $56,810.

Since no dolphin were caught last year, the prize money–$11,880–carried over into the 2014 tournament. No qualifying dolphin were brought to the scale Friday or Saturday, but several were landed on Sunday.

Moxie Boys’ angler Joe Zuramski’s 34-pound dolphin put him in the top spot in the division. The fish was worth $27,340. Mike Cusimano reeled in a 25 pounder aboard Reel Desire and won $1,000. Greg Smith caught a 22-pound dolphin while fishing on Spring Mix II, which earned him $500.

Ten-year-old Hugh Thomas Cropper took first place in the Junior Angler Division with a 49-pound tuna he hooked aboard Myra HT. He was was awarded $1,000.

Susan Menchaca’s 68-pound tuna she landed Sunday on the Wrecker, put her in first place in the Lady Angler Division. She pocketed $1,500.

Samantha Freas (Reel Chaos) and Valerie Dunn (D.A. Seas) tied for second place with 64-pound tunas. They were presented with Costa sunglasses and a pendant from Park Place Jewelers.

The Level I Boats Under 40 feet Winner Takes All calcutta was added in 2011. This year, all 20 of the boats smaller than 40 feet participating in the tournament entered the Level I calcutta. Fifty percent of the prize money went to the angler who reeled in the heaviest tuna. The other 50 percent was awarded to the team with the most tuna caught, measured by pounds.

Each year, half of the prize money in the Level G calcutta benefits an organization or charity. This year the Pusey Family Fire Recovery Fund, was the beneficiary. The family’s West Ocean City home was destroyed  by fire on June 26. They received $3,510. The other half of the calcutta money went to the Espadon team.

“Everyone had a good time,” she said. “We had greats crowds (at the scale).”

Organizers are discussing doing some new things for next year, she added.