With 4 breweries in town, over a others under an hour away, and more popping up every few months, Ocean City, MD has asserted itself as the fastest growing craft beer brewery destination on the East Coast. Each week, OceanCity.com brings you ‘Microbrew Monday’ to keep you in the know about what’s going on around our local brewery scene. Don’t forget to check out ShoreCraftBeer.com for complete craft beer coverage and to learn how you can win prizes just for drinking local with the ShoreCraftBeer.com Shore-17 and OC-8 Brewery Challenges! 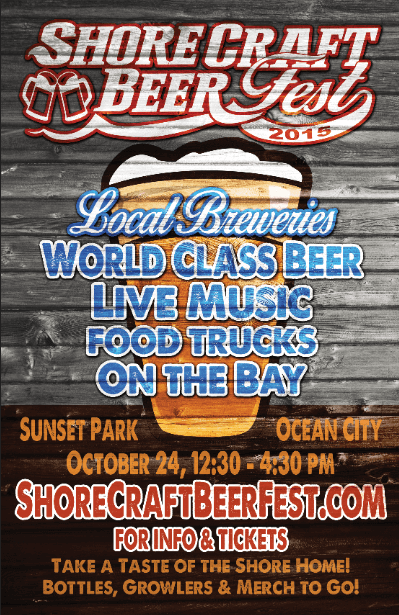 – As we head into October, we’re getting set for the first ever Shore Craft Beer Month in Ocean City and the surrounding counties. Not only will Ocean City’s Fall Restaurant Week feature local food and beer pairings, but many other businesses around the shore will be hosting special tastings and other events throughout the month. Make sure to check out the ShoreCraftBeer.com events page for complete listings, and follow Shore Craft Beer on Facebook for up to the minute updates.

– Speaking of Shore Craft Beer Month, tickets are on sale now for the capstone event- Shore Craft Beer Fest. This inaugural event takes place Saturday, October 24, at Sunset Park in Downtown Ocean City and features only local beer and breweries. Not only do festival goers get to enjoy unlimited samples poured by the men and women who make them, but also get the chance to taste two beers collaboratively brewed exclusively for the event as well as grab cans, bottles, and growlers of beers to go. VIP ticket holders also get an additional hour of tasting and access to a special seminar about the history of Eastern Shore brewing by beer author, Tony Russo. Tickets are limited, so grab yours before it’s too late.

Here are the rest of this week’s highlights:

– Evolution Craft Brewing has great food and beer specials all week at Public House Restaurant and the tasting room. Check it out Monday for 1/2 priced wings and all day happy hour; Tuesday you can get a beer and burger for only $10; Wednesday house-smoked brisket sandwiches are 1/2 off all day; Thursday is ‘Community Appreciation Night” featuring discounts for police, firefighters, EMTs, teachers and others who make the local community a better place; and Sunday Evo has 1/2 priced burgers and happy hour all day long.

– Ocean City Brewing Co., it has two dozen taps, many of which are occupied by craft beers made on premise. This week, Ocean City Brewing has new summer releases like its Strawberry X pub ale, Blood Orange IPA, Orange Crush Wheat Ale, and Watermelon Mint Ale, so make sure to stop by to sample them all! Also, head to the brewery for Pint Night on Tuesday at 7:00, “Firkin Friday” where a special, one-of-a-kind cask-conditioned brew is featured weekly, breakfast at the brewery on the weekends, and half priced drinks and drafts from 12am-2am for Midnight Madness. Finally, if you want a first-hand look at the brewing process, don’t forget to stop by OC Brewing Co. for a personal tour of the operation. Tours take place daily at 11am, 1pm and 3pm.

– The 3rd Wave Brewing Co., just up the road in Delmar, DE, prides itself on ‘Good Friends, Good Waves and Great Beer’ and wants to share all three with you on your way to or from the beach. Stop by the brewery for weekly events such as School Faculty Appreciation Night on Monday for Hoppy Hour prices with proper ID, Wednesday for 3 pints for $3 each, Flight Night on Thursday with half price flights, or any other night to try 3rd Wave’s newest offerings.

– Located at 10th St. and the Boardwalk, Ocean City’s first brewery- Backshore Brewing Co.- may have the best view of any brewery anywhere in the country. Stop by for the view and stay for the handcrafted beers and brand new HoopTea. Plus, don’t forget to be on the lookout for Backshore’s big screen debut in ‘Blood, Sweat, and Beer,’ a recently released documentary chronicling two craft beer breweries.