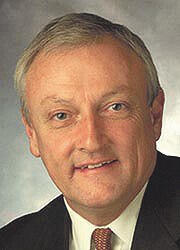 (Jan. 30, 2015) They’re neither glitzy nor glamorous as far as issues go, but State Sen. Jim Mathias is working to gain support in the Senate to pass bills to extend liquor licenses for non-profit veteran’s groups, delay the start of the school year until after Labor Day and to install POW-MIA flags in state-owned facilities.

Foremost, Mathias said he is interested in gathering co-sponsors for a bill to answer the call by Comptroller Peter Franchot to begin school in Maryland after Labor Day. School officials maintain it would be difficult to retain the proper end date and allow for weather circumstances such as snow days by delaying the start of classes.

“Tourism as an industry is fundamental,” Mathias said, “but it’s going to be a challenge and we’re going to need everyone’s help.”

A petition circulated by Franchot gained in excess of 13,000 signatures, including those of former Gov. Martin O’Malley and current Gov. Larry Hogan.

“We need to recruit and organize an army of 13,000 to tell local officials to get on board. We need people on board who benefit from tourism in Annapolis, Baltimore City, western and southern Maryland. We need parent-teacher associations, beverage associations, everyone to reach out,” he said.

Mathias also sponsored a bill scheduled for a hearing on Feb. 5.

“I’ve worked on this one for a long time,” Mathias said of SB38, which would allow certain veteran’s groups to purchase 7-day liquor licenses.

“Places like the American Legion are open six days a week and have to buy another license for an extra day like for the Super Bowl or Masters’,” Mathias said.

The new measure would allow non-profit veteran’s groups to purchase licenses valid for the entire week.

He is also working on a bill that “didn’t make it last time.”

In state-owned or operated venues that could accommodate them, Mathias said he would like to see POW/MIA flags required. Exclusions would be granted for certain facilities, he said.