Participants were originally scheduled to fish two of three tournament days–Friday, Saturday and/or Sunday, July 4-6. Because of Arthur rolling through, the competition turned into a fish one of two days event, Saturday or Sunday, July 5-6.

A total of 57 boats, carrying approximately 285 anglers, registered for the Canyon Kick Off. They all fished on Sunday.

“The ocean was good Sunday. It wasn’t really rough,” said Canyon Kick Off Chairman, Dave Birkett, who fished aboard the Shadowfax.

Unfortunately, Birkett and his teammates didn’t land any fish.

“I was in the right area. I watched people catch fish,” he said with a laugh.

Birkett thought the tournament went well, overall, despite fishing being a bit slow. The storm may have had something to do with it, he added.

“After a storm, it seems like there’s a little pod of fish and you’ve got to be right on top of them,” Birkett said. “We had three big eyes that were all caught in the Washington Canyon, a handful of yellowfin and a lot of dolphin that were caught outside the Baltimore Canyon.”

Joel Meltzer caught an 18-pound dolphin while fishing on the Proud Papa and T.J. Weaver hooked a 17 pounder aboard the Dilligaf to finished in third place.

The Proud Papa and Dilligaf teams didn’t take home prize money because they were not entered into any of the added entry level calcuttas.

Parker Wheeler’s 16-pound dolphin earned him and his Hatt Trick teammates $450. Eric VanLill landed a 15.6-pound dolphin aboard the Poore Sport and won $567.

Keith Puller earned first place in the tuna division with a 267.2-pound big eye he reeled in aboard the Jenny Poo. The fish was worth $9,967.50.

Angler Mike Peet and the No Quarter crew brought his big eye to the Sunset Marina scale in West Ocean City and it weighed in at 163.8 pounds, good for second place and $1,525.50.

Glenn Heitmann’s 158.4-pound big eye hooked aboard the Absolut Pleasure was worth $1,017.

The Billfisher crew released three while marlin to take first place in the division. The group won $7,920.

The Canyon Hunter team released two white marlin and was awarded $810. The First Light crew released one white and was presented with $1,510. The Last Call team also released a white marlin. The group took home $648.

The Ocean City Marlin Club’s next tournament is the 10th annual Kid’s Classic, July 19-20. The tournament is open to junior anglers 19 and younger.

Last year, more than 360 participants caught approximately 20 different species of fish. The tournament benefits the Wish-A-Fish Foundation, whose mission is to “provide a little relief for a family from the daily stress of having a child with special needs, such as a life-threatening illness, mental or physical disability, by taking the entire family out for a day of fun and fishing on the water.”

For more information about the Kid’s Classic, call 410-213-1613 or visit www.ocmarlinclub.com. 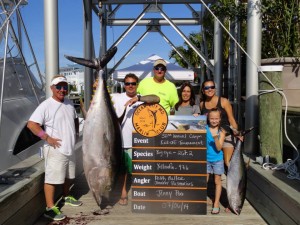 Keith Puller earned first place in the Ocean City Marlin Club’s 32nd annual Canyon Kick Off tuna division with a 267.2-pound big eye he reeled in aboard the Jenny Poo Sunday. The fish was worth $9,967.50.