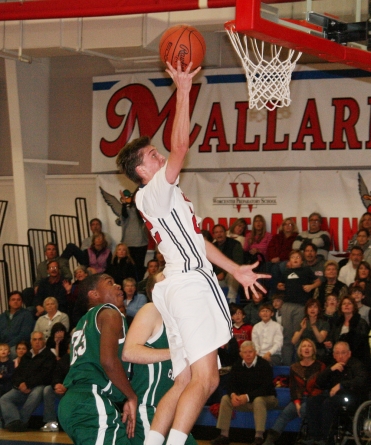 (Feb. 22, 2013) The Worcester Prep boys’ basketball team fell behind in the third quarter of Wednesday’s Eastern Shore Independent Athletic Conference semifinals, but bounced back in the fourth to win 51-42 over the Salisbury Christian Jaguars.

Worcester led 12-10 at the end of the first quarter and outscored Salisbury Christian 9-2 in the second to go into the halftime break on top 21-12.

“Salisbury Christian, I think, is probably the best coached team in the league. I knew at halftime when we were up that in the third quarter that coach is good enough that they were going to get the job done and come back,” Prep Coach Keith Geiger said.

The Jaguars went on an 8-0 run to pull within one point of the Mallards. The Berlin squad maintained a slight lead until Salisbury tied the score 26-26 with 2:45 left in the third quarter. The visitors netted two shots to pull ahead 30-26.

In the final seconds of the quarter, Worcester junior Matt Reilly hit one of two fouls shots and senior Zander Farr made a lay-up to bring the Mallards within one (30-29) as they headed into the fourth quarter.

In the huddle before the start of the final quarter, Geiger asked his players if they were tired.

“And that’s kind of insulting because we pride ourselves on running. They said ‘no’ and I told them they better start acting like they’re not tired, that it’s the last quarter of the game and their season depends on it, and they did,” he said.

Junior Ryan Nally put the Mallards back on top in the opening seconds of the quarter then scored again to give his team a 33-30 lead. He sank a three to increase Worcester’s advantage to six points.

After a Salisbury Christian timeout, Farr scored and the home team now led 38-30 with about five minutes remaining. The Jaguars never got closer than six points to the Mallards in the final minutes.

“Ryan made a couple big threes, [senior captain] Harrison [Brennan] made a three in the corner, Matt made a couple of post moves and that’s the game,” Geiger said. “And, we kept getting stop after stop on defense. I think defensively, that was a great game.”

Nally led Worcester’s with 25 points. Brennan chipped in with 11.

The Prep squad will host the Delmarva Christian Royals today, Friday, at 5:30 p.m. for the championship title.

“I feel good,” he said. “It’s the last game for everybody. If we can play defense like we did [against Salisbury] we can win. There’s no doubt.”