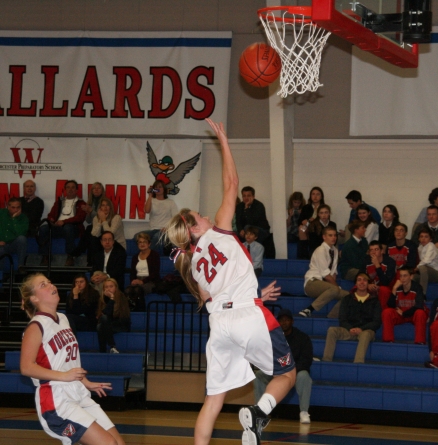 (Dec. 20, 2013) A number of squads the Worcester Prep girls’ basketball team has faced this season have struggled to penetrate the Lady Mallards’ defense and score.

As their defensive play remains aggressive and unwavering, the Mallards’ offense has improved as the girls become more self-assured.

“Our defense is pretty good every game, but our offense lately has been better. We’ve been working a lot on fundamentals and our offense,” said Prep Coach Simona Holland. “I think it’s more about them being confident. They’re really aggressive (on defense), but then they were always afraid of being on offense, that they couldn’t score. Now, they finally realize they can score and it’s not just about defense.”

Last Friday in Greenwood, Del., the Prep team scored 20 points in the first quarter and held the Greenwood Mennonite Flames to six. Worcester tacked on 10 points in the second quarter, while limiting Greenwood to five to lead 30-11 at halftime.

The visiting Mallards outscored the Flames 20-6 in the third quarter and went on to win the game 57-20.

“The girls did a great job on offense. They work really well together, passing and finding each other on the court,” Holland said. “I think that will help them win right now, and they really want to win. I want to thank the girls for working so hard.”

On Monday, the Mallards held the Holly Grove Eagles to single-digit scoring, winning the game in Berlin 50-8.

“They were really aggressive. They did pretty good on defense and they scored a lot of points, too,” Holland said. “Most of the girls scored. We’ve been trying to have everybody score every game or as many as we can.”

Ten players out of 13 on Holland’s roster scored. Leading the charge was Brennan, with 16 points. Shriver had 12.

The Mallards came out ready to play Monday. They put 20 points on the board in the opening quarter and held the Eagles to four. The Prep team added eight points to its total in the second quarter to go into the halftime break with a 28-4 advantage. After three quarters, Worcester enjoyed a commanding 42-5 lead. They won the competition 50-8.

The Mallards will return to the court after Christmas break, on Jan. 8, when they will play the Salisbury School Dragons at 4 p.m. in Berlin.