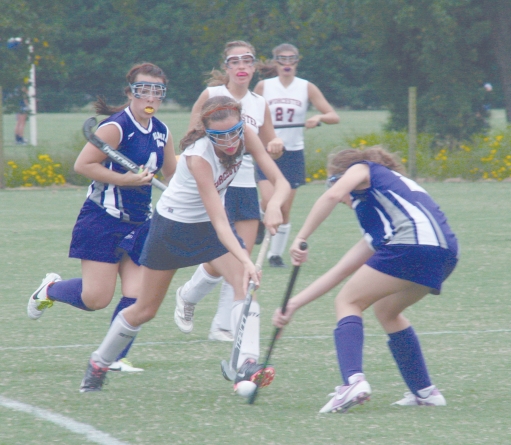 (Sept. 20, 2013) The Worcester Prep field hockey team scored big wins this week, first shutting out the Delmarva Christian Royals 15-0 on Monday, then the Lady Mallards topped the Holly Grove Eagles 6-1 the next day.

The Mallards led the Royals 8-0 at halftime of the Sept. 16 game in Berlin. Senior captain Meg Lingo netted two shots in the first half and juniors Jordie Loomis and Caroline Lindsay, sophomores Hanna Nechay and Isabel Carulli and freshmen Eva Parks and Regan Lingo each scored once.

Parks deflected the ball into the goal with her stick less than two minutes into the second half. It was followed by two junior Emmi Shockley goals.

Parks, R. Lingo and freshmen Leigh Lingo and Kathleen Emche finished off the scoring for Worcester.

Freshman Margaret McGuiness started in goal for the Mallards. In the second half, she played on the defensive line and senior Maddie Pilchard took over in goal. Pilchard had one save.

A number of junior varsity players got the opportunity to compete in the varsity game and they played a good majority of the 60 minutes.

“Overall I am very pleased with the increase in knowledge and skill of our new players. With guidance from returning players, they have quickly developed a sense of unity and love of the game,” said Prep Coach Jenny Frostrom. “I feel like all of my players (varsity and JV) really work well together. They help and encourage each other. We make it our goal to learn and increase our skill together through hard practice and game experiences.”

Tuesday’s game was much closer, but the Mallards still won by five goals. Seniors, Alison Greer and captain Sarah Arrington, gave Worcester a 2-0 lead. Holly Grove scored in the final minutes of the first half.

Frostrom said she was proud of the level of play by the Mallards.

“They were right where they needed to be and worked the ball well back to the midfielders. It was hard to get through them,” Frostrom said. “Our midfielders, Jordie Loomis and Natalie Twilley, played an awesome game and newcomer, Isabel Carulli, was amazing in the midfield and is a true asset to our team. We have an incredible forward line–Sarah, Hannah, Alie, and Meg are excellent ball carriers and are very skilled inside the circle.”