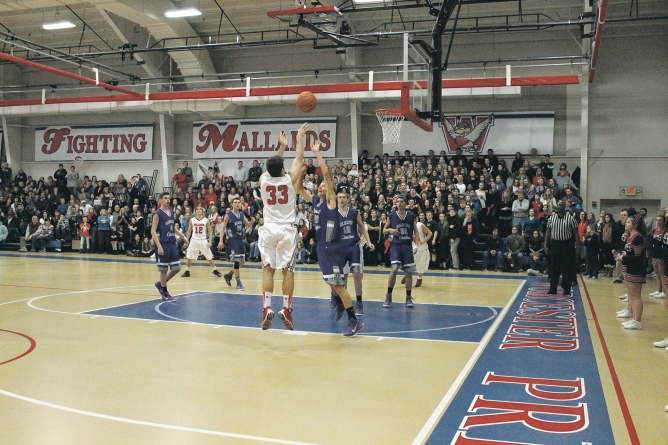 “The entire school came out and was supporting us. I’ve never seen that many students, teachers, faculty, family members at one place,” Worcester Prep Coach Keith Geiger said. “It was because of [the Mallards] that the stands were so packed, and they brought the school together … I thought it was important for the school and important for the future of the basketball program.”

“Both teams played really strong defense and both teams had trouble scoring. It came down to who could score and we just couldn’t find enough ways to score. We certainly had enough opportunities throughout the game,” Geiger said. “We shot 5-for-13 from the foul line and missed some lay-ups. We also didn’t hit any threes all game, except for Tucker [Brown’s] from half court. Delmarva is a tall team … and we had trouble finishing around the rim.”

The Royals led 11-8 at the end of the first quarter. Delmarva Christian went into the halftime break ahead 15-14.

The Mallards scored 10 points in the third quarter and held their opponent to five to gain a 24-20 advantage.

With four minutes left in the fourth, Delmarva Christian tied it, 26-26.

Prep junior captain Wyatt Richins gave his team a two-point lead with 3:30 remaining. About a minute later, the score was even again.

With 1.4 seconds on the clock, Delmarva Christian’s Micah Magee was fouled shooting a three. He missed his first free throw, then sank the second to put his team ahead 29-28. He missed the third shot and Worcester called a quick timeout with 1.2 seconds remaining.

The Mallards threw the ball down the court but the team was unable to get a shot off before time expired.

“I was very happy with the season and they should be proud of themselves,” Geiger said. “I thought we exceeded expectations this year.”

Telo was Worcester’s leading scorer this season, averaging 12 points per game. He was also voted as the team MVP by his fellow teammates.

Elio and Zorn were named to the All-ESIAC Second Team. Brown and sophomore Owen Nally received Honorable Mention accolades. Tucker was the only freshman to receive league honors and Owen the only sophomore.

The team will lose two players to graduation – Zorn and Sam Deeley.

“Sam was a first-year player that was a great help to the team. He didn’t get a whole lot of playing time, but his attitude and his effort, especially in practice, were outstanding,” Geiger said. “Erik wasn’t a big scorer, but really turned into a great rebounder and defender. He held several of the First Team ESIAC players to under 10 points.”

With a core group of players planning to return next season, Geiger thinks the team will be very strong the next couple of years.

“We have some really great freshmen and sophomores that have seen good minutes and started games this year. I’m excited about the next few years,” he said. “Hopefully, the school can keep the excitement and enthusiasm for basketball. I would like to win the ESIAC the next couple years and also try to win a few out-of-conference games.”