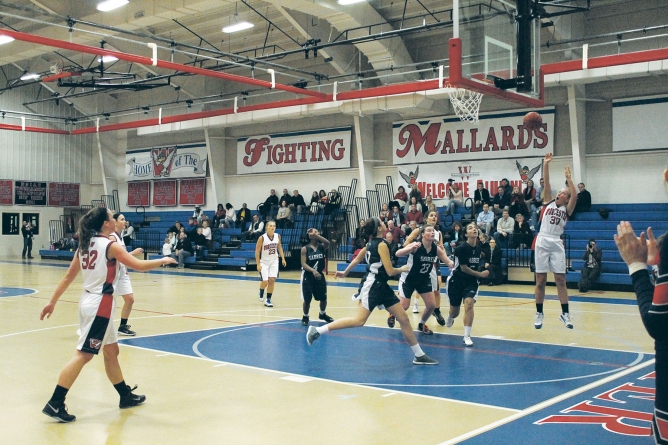 (Feb. 13, 2015) The Worcester Prep girls’ basketball team trailed for three and a half quarters Monday night, but the Lady Mallards never gave up. They fought until the end for a come-from-behind 25-24 victory over Eastern Shore Independent Athletic Conference rival, the Saints Peter & Paul Sabres.

“I think we played great defense, but then on offense the ball just would not go in. Every single shot the ball would come back out,” Prep Coach Simona Holland said. “Defense was really good. We got some interceptions, we stole the ball, we got rebounds, then we’d go back on offense and the ball just wouldn’t go in. The girls played hard the whole game, we just had an off night shooting.”

Only four points were scored in the first quarter and they were by the Sabres.

Saints Peter & Paul pulled ahead 6-0 in the second quarter, but Worcester answered. Sophomore Leigh Lingo put the Mallards on the board with five minutes left in the half. Senior captain Sophie Brennan scored and was fouled. She made her free throw and the Mallards cut the Sabres’ lead to one.

Senior captain Natalie Twilley brought the Mallards to within one at the 4:55 mark in the fourth quarter. About a minute later, Karlie Southcomb, a sophomore, gave the Prep team its first lead of the night, 21-20.

“I was really excited because it was my first couple of minutes [playing] in the second half,” she said.

“I was really excited for the whole team because Saints Peter & Paul is one of our biggest rivals.  Finally [having a lead] definitely gave us a lot of hope.”

After taking a one-point lead, Holland said, “I think they finally realized they can win. They just played hard and really wanted to win.”

Saints Peter & Paul pulled in front 22-21 with two free throws, but Southcomb provided her team with a 23-22 advantage with 1:45 remaining.

With 20.4 seconds on the clock, junior Grace Tunis was fouled and stepped to the line to shoot two.

“Obviously I was nervous because it was the end of the game. My coach looked over at me and she just said ‘keep your arm straight.’ I kept my arm straight and they went in,” Tunis said. “I made the first one and I felt a little relief because we were already up by one, then the second one put us ahead by three. [After hitting two] I think I was feeling like we have to get back on defense really quick and keep playing because there wasn’t much time left in the game and I just hoped to God that our team would finish the game [on top] and we did.”

The Sabres scored with 1.1 second on the clock, but the Mallards held on for a one-point victory.

“We didn’t have as many points as we usually get, but I think we played our hearts out in the second half,” Tunis said.

Twilley contributed with four points, nine rebounds and six blocks. Southcomb scored four points and those baskets switched the momentum in her team’s favor late in the match. She also had seven rebounds and three steals.

“It was a very close game. Very intense,” Southcomb said. “They beat us a couple weeks back and we really wanted this. They’re one of our biggest rivals and it feels amazing to beat them.”

Worcester’s final game of the regular season is today, Friday, against the Holly Grove Eagles in Westover at 5:30 p.m.

The ESIAC tournament kicks off Wednesday with the semifinal round.