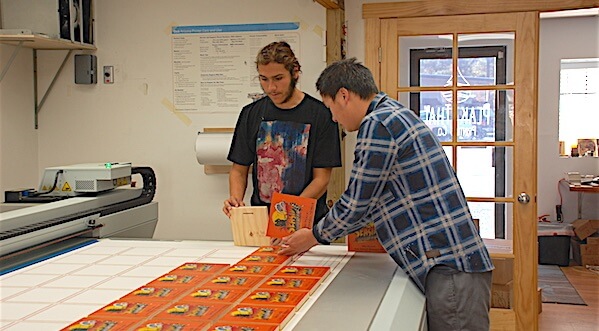 Arguably nothing has done more in the way of making photography an art than the digital age. It isn’t that photography wasn’t always artful, but the availability of quality gear and editing equipment has given people access to things they never had before. But, more than that, it gave budding photographers access to one another. People could learn and improve by sharing tips and tricks. They learned to critique and be critiqued and began looking at photos primarily as art rather than just as someone else’s memories or experiences. Making photography art is now a thing anyone with the patience to practice can do. And the market has responded.

Making photography art at Plak That

With the rise of digital photography, there has been something of a vacuum in the print business. People sometimes get prints done at a pharmacy, but most photos taken will remain exclusively digital, where they can be shared and catalogued. Companies that make books of photos, or collages were popular for awhile but in West Ocean City, a company has begun to reimagine what can be done with digital printing.

Plak That was the brainchild of Wyatt Harrison, who discovered the process while on vacation in California, where a company printed signs on wood that retained their color and were detailed and distinctive. He thought the same that was being done with decorative signs could be done with photos and contacted the company to ask. They said they could, but didn’t see much of a market for it. Still, they gave him a wholesale deal for printing to order.

Harrison was working at Malibu’s Surf Shop at the time and thought surfing or other beach-y photos printed on wood would be popular. He convinced his boss there to give them a try and the prints became outrageously popular. One of his first big successes was printing awards for the Dew Tour. Eventually, so popular was the service that rather than being the middle man, Harrison decided to purchase a printer and sell direct.

From the first, Plak That was popular among people who wanted iconic beach scenes to display in their homes, but it didn’t take long for Harrison to realize that he could also provide signs for local businesses with ease. Plus, they would be more distinctive than traditional signs and often less expensive.

He already was making the effort to get superior wood for his photography customers, many of whom were selling their art at shows all over the region, so ensuring they were quality items for businesses was already built into the process.

Once the commercial sign aspect of his business picked up, Harrison began expanding his approach, testing out different materials as his clients required. Plak That has printed on tables, awnings and massive commercial window boards. The company also prints on practically any flat material. Harrison has been experimenting with metals and even ceiling tiles, learning to adjust the machine to better accommodate different textures.

The rise of Photo Friday

Plak That now partners with OceanCity.com to moderate a weekly photo contest that awards one person the photo of their choice printed on wood. Winners get a 5 x 7 wooden Plak with their photo on it. Plak That has become a leader in making photography art and has provided thousands of people with personalized photos that make fantastic gifts or decorations.

Over the past three years Plak That has gone from a part time endeavor by Harrison, to a thriving small business in West Ocean City. Recently he hired graphic designer Kong Dong and took on intern Roland Gerachis to help keep up with all of the orders as well as to expand the company’s services to other businesses.